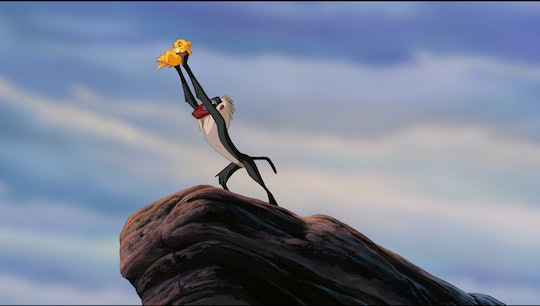 If You're Hoping To Watch The OG 'Lion King' On Netflix, You'll Need To Keep Looking

With voices by Beyoncé and Donald Glover, Disney's live-action remake of The Lion King is set to be this year's quintessential summer movie. And while the verdict's still out on whether Disney's live-action remakes top its classic animated films, plenty of Lion King fans will want to revisit the original before getting a peek at what the new Simba and Nala look like. But is the original Lion King be on Netflix for you to stream right now?

Fans hoping to stream the original Lion King on Netflix will unfortunately have to find another means of watching this 1994 Disney classic. Although a number of animated Disney films are currently available to stream on Netflix, including Pocahontas, Mulan, Hercules, Tarzan, Lilo & Stitch, and The Emperor's New Groove, a quick search on the streaming platform reveals that, sadly, The Lion King isn't among them.

In fact, it seems as if the original Lion King isn't likely to hit Netflix anytime soon. According to The Netline, Disney plans to roll out its own streaming platform later this year in an attempt to compete with streaming-giants like Netflix and Hulu. The live-action Lion King, which hits theaters July 19, is expected to be one of the first titles included on Disney's new streaming service, The Netline reported.

That means that, for now at least, that those who don't already have a copy of the original Lion King will have to buy or rent it in order to be able to revisit Simba's adventures with Nala, Timon, and Pumbaa. According to Disney's official website for the original Lion King, digital versions of the film can be purchased through online retailers such as iTunes and Amazon for $19.99. Those looking to watch the film while sticking to a limited budget, might find a DVD copy available at their local library.

However you get your hands on a copy, the original Lion King is worth tracking down. With stars like Nathan Lane, Whoopi Goldberg, and 90s heartthrob Jonathan Taylor Thomas voicing the characters, original songs by Elton John, and a music score composed by Hans Zimmer, it's definitely high up on the list of Disney's must-see animated classics.

In fact, the film was the number one G-rated box office film of 1994 in the United States and pulled in more than $9 million in total worldwide, according to Box Office Mojo. It proved to be so popular that Disney eventually built an entire franchise around it, complete with various merchandise and toys, multiple spin-off movies, video games, television sequels, and even a Tony Award-winning Broadway musical.

According to Digital Spy, the soundtrack for the new, live-action Lion King film is set to include many of the original film's classic songs — sung by the new film's cast, of course —and scores. But fans will also be treated to at least two new songs, according to Vulture. While details regarding one of those new song's have been kept well under wraps, Vulture has reported that the other song is a collaboration between John and Tim Rice. John is expected to perform the song, titled "Never Too Late," himself.

You can see Disney's animated classic come to life, literally, when the new Lion King hits theaters on July 19.