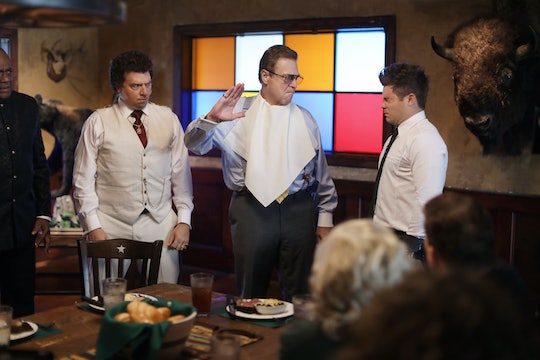 I Could Easily See 'The Righteous Gemstones' Family Preaching On TV

HBO is taking you to church with its hilarious comedy series, The Righteous Gemstones. The show follows the adventures of the Gemstones, a world-famous family of televangelists driven by greed and dysfunction. Some scenes in the series are outlandish and comical, but because the characters seem inspired by real life, many are wondering if The Righteous Gemstones is based on a real family.

The premise and the characters in the series are purely fictional, but they were inspired by the televangelical community as a whole. The show was created by actor and writer, Danny McBride, and he revealed he didn’t use any specific family or church for inspiration, as reported by Entertainment Weekly. “It was, as a whole, how massive these operations are, they’re just ripe for satire,” he said.

The series is centered around three generations of the Gemstone family. The patriarch, Eli Gemstone (John Goodman) leads the megachurch, with his children, Jesse (Danny McBride), Kelvin (Adam Devine), and Judy (Edi Patterson), in tow. Each member of the family has a secret sin of their own, but they continue to preach righteousness to their audiences for profit.

In an interview with GQ, McBride explained how his own life experiences inspired this satirical look at modern megachurches. “Both my parents were really involved in the church and I have a lot of memories of being a kid and being dragged to church,” he said, continuing:

It really wasn't until I moved to Charleston, South Carolina about two years ago and started seeing all the churches and it brought me back to my childhood. It got me curious about, what is church like now? How is it different from when I was a kid and I went? That’s when I started reading about these megachurches and seeing how totally different church is now, and then the more I read about these different pastors, it just felt like it was a world that sort of would be an interesting place to set a story like this.

Initially, McBride wrote the Gemstone family as the show’s antagonists, but over time he realized how interesting it was to tell the story from their point of view. “I knew I wanted to do something on a minister, and I started writing it and built this megachurch family that was sort of the antagonist and was blackmailing this minister,” McBride told Entertainment Weekly in an interview. “And the more I wrote about it, the more it was doing what I kind of didn’t want it to do, which is that it was all about the church, it was all about religion. I started reevaluating the story and I was having the most fun writing the Gemstones and the dynamic amongst them was what I was looking for. So shifting the story and making those guys the main characters instantly turned it into more of a show about a family, which I felt was more relatable and interesting.”

The Gemstone family isn’t based on anyone specific, but because McBride drew inspiration from various modern megachurches, you may find bits and pieces of reality sprinkled throughout the series.

The Righteous Gemstones premieres on Sunday, Aug. 18 at 10 p.m. ET on HBO.