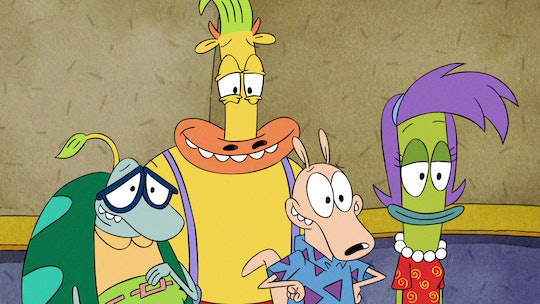 'Rocko's Modern Life' Returns To Netflix As An Original Movie

After decades off the air, Rocko's Modern Life is returning to the small screen in a slightly different format. Instead of a new season of the most '90s of '90s cartoons, a movie called Rocko's Modern Life: Static Cling is now streaming on Netflix. But if you're looking for a Friday night movie to watch with your family, you might be wondering if the Rocko's Modern Life movie is appropriate for kids under 10.

That is a tricky question to answer. Netflix does list it within the categories "Family Comedies" and "Children & Family Movies," but they don't provide a more specific age rating. And if the Rocko movie is anything like the TV show, then it may be slightly mature for children on the younger end of the age spectrum. Personally, I'm a former kid who most definitely watched the cartoon when I was under 10 and a lot of the jokes just went over my head. But revisiting the show as an adult can be mildly scandalizing; some of its humor was definitely edgier than my little brain could comprehend at the time.

Ultimately, it's going to be up to the parent to determine what their child can handle. Common Sense Media suggests that the original cartoon is best suited to kids age 11 and up because of its sexual innuendo and occasionally surreal violence. If the movie shares the same tone as the show, then its audience might be older than the single digit crowd.

The trailer gives the impression that the Rocko movie might be targeted to the kids who grew up watching it and are now adults. Though that shouldn't stop new fans from giving it a try, the storyline seems very relevant to anyone who had to leave the '90s behind and grow up: Rocko and his pals Heffer and Filburt have spent the last 20 years in space and returned to find their O-Town home greatly changed. Now it's all about chasing after constantly updating O-phones, becoming obsessed with TV shows, and enjoying ultra realistic superhero franchises. It might be painfully familiar for those of us in our 20s and 30s.

And it's also the kind of humor that lands much better with millennials than grade-schoolers, because it's so reminiscent of our lives. There's no doubt that a little one might enjoy the animation and farting cloud jokes, but the heavy dose of nostalgia could be beyond their pay grade. There is also a good deal of satire and social commentary inherent in the series, which may prove tricky for kids under 10.

Ultimately, Rocko's Modern Life is a cartoon for children, even if it is a boundary-pushing one. And a parent is the only one who can really determine if something is suitable for their kids. Static Cling is only 45-minutes, so perhaps you can give it a once-over before passing it on to your kiddos, but if you'd rather stay on the safe side, then Rocko should probably remain in the realm of middle schoolers, teenagers, and adults who really miss Dunkaroos.