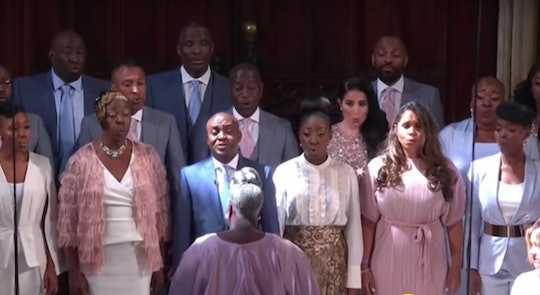 There were many breathtaking moments during the royal wedding this weekend, but the gospel choir singing "Stand By Me" just before the service was definitely one of the standouts. So is the royal wedding choir Kingdom Choir on Spotify or somewhere else on the internet? Because we could all use a little more of them in our lives.

The choir was led by Karen Gibson and has performed all around the world. Sadly, they don't seem to be on Spotify yet, but if you dig into YouTube, you can find other videos of their performances from the past few years. Given the popularity of their "Stand By Me" cover at the wedding, it's possible that all the searches will end up with the choir on Spotify or iTunes eventually.

Not that they're new or need the publicity, of course. Gibson founded the choir 20 years ago and has led its performances for dignitaries such as Nelson Mandela, Desmond Tutu, Pope Benedict XVI, and former President Bill Clinton, according to the UK Choir Festival.

They have also sung for the royal family before, too. Gibson and the Kingdom Choir performed at Buckingham Palace for VE Day Celebrations in 1995, for the Queen's Jubilee procession in 2002, and at the Concert for Diana in 2007. So they were obviously a perfect choice for Prince Harry and Meghan Markle's wedding, who reportedly worked hard planning the entertainment for the ceremony and reception.

Kensington Palace announced the choir in a tweet back in April writing, "Karen Gibson and The Kingdom Choir. The Choir is made up of a group of British artists dedicated to creating a sound that demonstrates the community they share, and has been performing both nationally and internationally for over 20 years."

Gibson responded to the honor in a statement on the palace blog, saying:

The Kingdom Choir is truly honored to be invited to sing at the wedding of Prince Harry and Ms. Markle, and very excited to be taking part in such a historic moment. It will be a moment that we will always treasure, and we’d like to take the opportunity to wish the couple all the very best for their coming union.

Gibson added in a statement on the choir's own website:

We are extremely excited to be taking part in such a historic moment, and know that it is one that we will always treasure. For this special day we have invited some friends of The Kingdom Choir — some of the finest from the worlds of gospel, pop and jazz — to join us.

Guests both in and outside of the chapel seemed to enjoy the performance before Markle walked down the aisle. Outside of St. George's Chapel at Windsor Castle, crowds that had gathered on the lawn just outside joined in, too. Although that's probably not what Gibson meant when she said she was bringing "friends of the choir" to perform at the wedding, it definitely worked. The 1961 ballad wasn't the only song performed at the wedding, but it fit right in with the theme of love and unity.

According to Time, the song, which was written by American singer-songwriter Ben E. King, and written by King, Jerry Leiber, and Mike Stoller, has been covered by over 400 artists. The song is about love, but it also has a strong political message, given its use during the civil rights movement. So it was a big deal that Markle and Harry chose to have it performed at their wedding by an American gospel choir. Now, if only they could get the choir a page on Spotify so we could listen to them all day long.