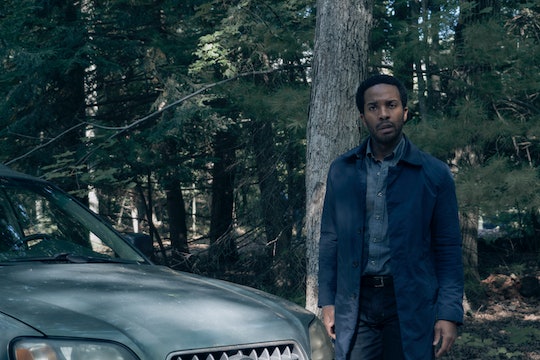 Inspired by the world of Stephen King, Hulu’s Castle Rock weaves in subtle references to characters and concepts from his novels. In the latest episode, “Filter,” viewers are introduced to a mysterious concept called the “schisma” which could be contributing to the town’s chaos. Fans have been looking for clues in the author’s previous works, so, is the schisma in other Stephen King books? It might not be called a schisma, but, according to Reddit, his works do feature similar phenomena.

Warning: Spoilers for Episode 6 of Castle Rock ahead.

In the sixth episode, Henry Deaver comes across a videotape of his childhood in which his father, Reverend Deaver is taking him through the forest. Because he has barely any recollection of his past, Henry takes the tape to the forest to follow the same path he took with his father. The path eventually leads him to a deaf man, Odin, who signs through his interpreter and protegé, Willie (played by Rory Culkin). Odin tells Henry he knew his father, and that together they would try to listen to the “schisma” or “voice of God.”

Odin goes on to describe the schisma in more scientific terms, calling it “nanoscale turbulences caused by cochlear quantum totalities abrading in parallel.” He explains that it is the universe’s way of trying to reconcile “all possible presents” and “all possible nows,” adding that the schisma is “eternal and everywhere, underlying all space time.” Odin also explains that for people who can hear the schisma, it sounds like a ringing in the ears — which Henry has been suffering from since he returned to Castle Rock.

On Reddit, King fans have been looking for clues to the sound’s origins, and some connected it to it to his Dark Tower series. “I don't think they have the rights to Dark Tower since Amazon is working on that show, but the noise makes me immediately think of a thinny,” wrote Reddit user Harry_Seaward_1128.

Reddit user Katyggls wrote that “thinnies” in the Dark Tower are like “spots where the fabric of reality is thin allowing things from those other realities to spill over,” while creating an unpleasant sound similar to the schisma described in Castle Rock. The user theorized that Castle Rock is home to one of those thin places, and the schisma is making people react in violent or insane ways, and possibly even allowing evil entities to come through and create trouble in the way that Leland Gaunt did in Needful Things. “The kid might be something from one of these other realities," the user opined.

Other Reddit users connected the schisma to the Wendigo demon from King’s books. “My first thought was a wendigo. But that was in Pet Semetary and The Girl Who Loved Tom Gordon,” Redditor Olily theorized. Another Reddit user, Rolidu, said, “In Pet Semetary the wendigo sounds like a loon calling and the forest groaning — theory was also driven beforehand when the stag head was uncovered in the snow.” Throughout King's novels, there are characters who hear voices. And according to King’s Fan Wikia page, the character Lester Coggins from Under the Dome was a minister who thought he claimed he could hear God — similar to the character of Rev. Deaver.

While the schisma isn’t specifically mentioned in King’s books, the concept might be inspired by his stories. It will be interesting to see what the schisma really is on Castle Rock, what effect it has on Henry and the rest of the town, and how it connects to the Stephen King universe.