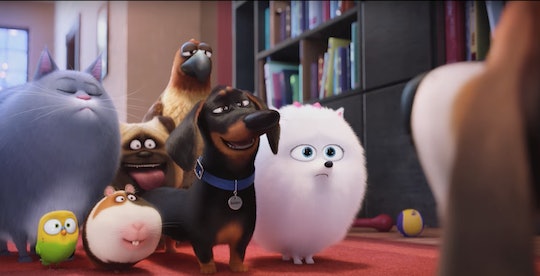 Is 'The Secret Life Of Pets' Appropriate For Kids? It's Silly, Innocent Fun

The Secret Life of Pets has, as is the case for seemingly every animated film these days, has a stacked cast of famous voices. Comedians Louis C.K., Eric Stonestreet, and Kevin Hart top the list along with so many others: Jenny Slate, Ellie Kemper, and Dana Carvey among them. It's no doubt that these actors are hilarious, but their comedy styles are definitely not squeaky-clean. Whereas I'm totally eager to watch the film, parents are probably wondering: is The Secret Life of Pets appropriate for kids?

I can't remember the last time I laughed out loud at a mere trailer, let alone one meant for a kid's film, so hats off to you, The Secret Life of Pets, for doing the impossible. Growing up with dogs, and now raising a 1-year-old puppy, I suppose I am more primed for dog-related media than your average moviegoer. A poodle headbanging may seem like niche-humor but, for me, it was very on-brand. I was in stitches.

The Atlantic summarizes Pets as "90 minutes with some nutty, heroic furballs on a hero’s journey with very low stakes." The film doesn't delve deep into complex emotion or formative life-events; They're just silly, sweet dogs (and cats, birds, etc.) with varying agendas, goals, and attitudes. Pets is a straightforward plot with mild deviations from the norms of animated films.

A few parenting-oriented sites had thorough run-downs on whether or not to take your children to see Pets. According to Common Sense Media, The Secret Life of Pets is suitable for children ages 6 and up, as it offers a positive message amidst some bodily humor, mild scariness, and some "insult language." Moviefone recommends the film to elementary school aged kids and up, citing some fighting and chase-scenes as the reasons for parents to use discretion with young children.

In assessing the film, Michael Foust of The Christian Examiner emphasizes that "Pets isn't as kid-friendly as Finding Dory, but I think most families would consider The Secret Life of Pets acceptable for small children."

In a Time for Kids video, three young movie experts give their input on The Secret Life of Pets in contrast to other summer hits The BFG and Finding Dory. In comparing all three, the kids rank Pets as their favorite.

The verdict? Your kids — especially if they're animal-lovers — might ask "can we go again?" more than once. And you know what? That's probably just fine.

More Like This
Barbie Honors Aviator “Queen” Bessie Coleman In Their Inspiring Women Line
13 Is "Too Early" For Kids To Be On Social Media, Surgeon General Cautions
These 72 Instagram Captions Are Perfect For Your Snow Day Pics
30 Messages To Write In A Valentine's Day Card For Your Child
What Parents Are Talking About — Delivered Straight To Your Inbox