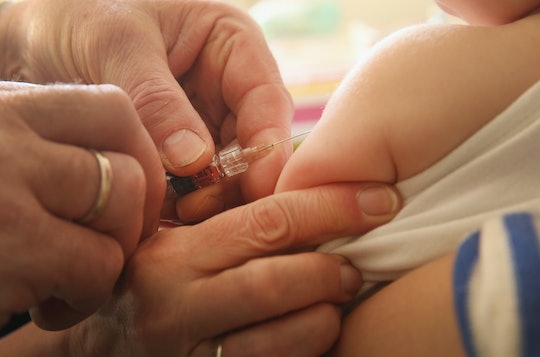 Is The Selective Vaccine Cycle Safe?

Over the past few years, debates about vaccinating children have reached a fever pitch. Not only are parents debating whether children should even be vaccinated (they should be), they're also arguing over a practice called selective vaccination, a trend John Oliver dissected on his show Last Week Tonight on Sunday. For those who don't know what a selective vaccine cycle is, it's when parents space out or delay when their child is vaccinated, a trend born from an increasing distrust in vaccinations. Given all the conflicting information on vaccines out there, it's not surprising parents are confused about which path to take, especially because have been told by the growing anti-vaccination community that their child is at risk. So, is the selective vaccine cycle safe?

Although the concept of a selective vaccine cycle isn't necessarily a new one, it became especially popular in 2007 thanks to a man named Dr. Robert W. Sears. Sears published a book called The Vaccine Book: Making The Right Decision For Your Child, a work which analyzes the alleged dangers of vaccines while also providing a guide on the selective vaccine cycle. Sears' recommendation to push back certain vaccinations for years or months drummed up a lot of press, especially since his views veer from the Centers for Disease Control and Prevention's recommended vaccination schedule. For many concerned parents, Sears' book presented a middle ground between a CDC-approved vaccination schedule and not vaccinating at all. Essentially, Sears tapped into a market of worried parents looking for an alternative to the CDC's vaccination schedule but still hesitant to abandon vaccines all together. The only problem is, Sears' thinking, along with other selective vaccine cycle enthusiasts, isn't safe.

In Oliver's well-researched segment on vaccines, he sympathized with parents who are genuinely frightened over vaccinating their children. It's a reasonable fear when people like Sears are implying that doctors want to pump huge amounts of aluminum into newborns.

According to the article The Problem With Dr Bob's Alternative Vaccine Schedule, Sears' wrote in his book:

When a baby gets the first big round of shots at two months, the total dose of aluminum can vary from 295 micrograms… to a whopping 1225 micrograms if the highest aluminum brands are used and a hep B vaccine is also given. … These doses are repeated at four and six months.

Even if you're not a math buff, the amounts of aluminum Sears cites sound like a lot. Tons of aluminum exposure can't be safe for young babies, right? The Problem With Dr Bob's Alternative Vaccine Schedule goes on to state, however, that "by 6 months of age, infants typically ingest ∼6700 μg of aluminum in breast milk, 37800 μg in infant formula, or 116600 μg in soy-based formula." The symbol "μg" translates to a microgram, by the way. It's also important to note that the CDC has yet to change its vaccination schedule as the result of aluminum concerns.

Unfortunately, this fear-mongering with misinformation is perpetuated by politicians like President Donald Trump. Oliver pointed to Trump's tweets on the selective vaccination cycle:

What's dangerous about Trump's tweets is that there's no science or research backing up his claims. It's especially disturbing when you consider how brazen and bold Trump's tweets come across.

As for what can happen to a child if a parent followers the selective vaccine schedule, reporter Tara Haelle said to NPR:

Well, each time you go to the doctor's office, you are subjecting your child to more microbes that are in that office. You can catch a disease every time you go to the office because sick kids go there. You also are increasing the number of stick visits. So a - you know, a child can get one needle or three needles in a visit, and there are studies showing that getting three needles is no more traumatic than getting one needle. But having three different visits with a different needle each time is more traumatic.

Furthermore, Haelle reported that the CDC schedule was highly vetted by a wide array of medical professionals:

... In fact, the Institute of Medicine conducted a huge study looking at the entire base of evidence in 2013 with the intention of specifically assessing the safety and effectiveness of the schedule as it is currently written. The Institute of Medicine is comprised of a bunch of different professionals from all different disciplines in health and medicine without any industry ties. They looked at the evidence altogether and said, yes, this is a safe, effective schedule. This is the safest, most effective way to protect children from these diseases.

Backing up Haelle's report is Simon Hambidge, a director of general pediatrics at Denver Health. Hambidge told Scientific American that a select vaccine schedule can create emotional issues of "distrust" within a child among other things. Hambidge said:

You are increasing the amount of sticks your child must endure—and if you delay them enough, your child can develop a real fear and distrust of the doctor because as they get older they have more of a memory of the shots. We also worry that your child will not get all the shots they need because it is hard logistically to come back so often.

Additionally, a 2010 study proved that children who were administered delayed vaccines were no healthier than children who adhered to the CDC vaccination schedule, and researchers also claim kids on a selective vaccination schedule are susceptible to diseases like measles. According to the CDC, "from January 1 to May 20, 2017, 100 people from 11 states (California, Florida, Maryland, Michigan, Minnesota, Nebraska, New Jersey, New York, Pennsylvania, Utah, and Washington) were reported to have measles." Given the reemergence of measles, it's a big risk to delay the measles vaccine for children.

Michael Smith, the pediatric infectious disease specialist at the University of Louisville, told The Scientific American:

In this context, any potential side effect—real or perceived—may be enough to convince a parent that it’s safe to defer vaccines. However, that is not a safe choice, especially as vaccine-preventable diseases like measles are making a comeback.

Paul Offit, director of the Vaccine Education Center at The Children’s Hospital of Philadelphia, added, according to The Scientific American:

Ten years ago if you chose to delay vaccines, it wasn’t as big a deal as it is now, but that is a more dangerous choice now. We’re seeing far more cases of measles, mumps, pertussis and bacterial meningitis. If you walk out of that office now unvaccinated, you are walking into a more dangerous world.

Vaccinating children, as proven by many scientists and researchers with credible backgrounds, is not something that should be up for debate. As numerous studies have shown, adhering to a selective vaccine cycle puts children at risk of contracting life-threatening diseases like measles. Furthermore, this trend can cause emotional trauma for children who receive shots in many drawn out visits as opposed to a few sessions. Although there are many proponents of the selective vaccine cycle, parents should ultimately listen and adhere to CDC guidelines for the sake of their children and others with compromised immune systems, who are often put at risk by unvaccinated kids.