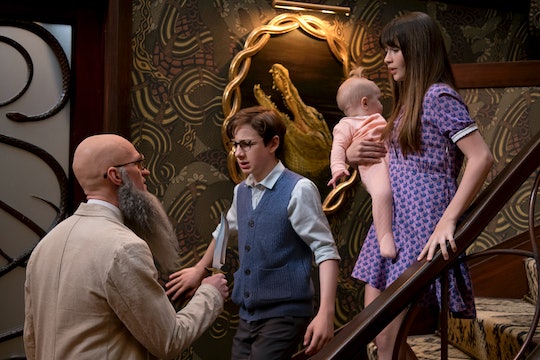 The Closing Number On 'ASOUE' Teases More To Come

(Warning: this post contains unfortunate spoilers from Episode 8.) The first season of Netflix's new show A Series of Unfortunate Events, didn't end on a happy note, but no one should've expected it would given the title. Viewers were warned from the start that the series would have no happy ending and this is just the beginning of the unfortunate events the Baudelaire children will have to face. Still, the Season 1 finale ended in song and while it wasn't a happy song it was interesting to witness. But is the cast of A Series of Unfortunate Events really singing in the closing number? It would appear so.

The first season concluded with the Baudelaire children all out of guardians. After first being placed with the evil Count Olaf and passed along to Dr. Montgomery Montgomery and Aunt Josephine, both of whom Count Olaf killed, the children escaped to find answers about their parents only to be found by Count Olaf once again. Thankfully, they escaped his clutches once more but Mr. Poe — the worst executor there ever was — took the children to a very depressing looking boarding school and left them there to fend for themselves.

Along with the Baudelaires are three other children they haven't met yet, whose parents also died in a fire (the Mother and Father we met early on). All of the children's parents were friends and worked in the same secret society, but the children haven't figured that out yet. What they do know is they've already suffered through a lot of unfortunate events and they'll more than likely face even more moving forward. At least, that's what the closing song so kindly implies.

The majority joins in to sing the closing number, beginning with the narrator Lemony Snicket, and continuing with Mr. Poe, all three of the Baudelaire children, and of course, the villainous Count Olaf who just won't quit. The song is not a pleasant or happy one, but it fits the theme of the show perfectly. "There's no happy endings, not here and not now," the cast sings. "This tale is all sorrows and woes."

The cast continues to sing on about how you might think this would be a happy tale, but it really, truly is not. The song continues until Mr. Poe gets into another one of his ridiculous coughing fits and the song concludes with him. Of course, Mr. Poe who's seemingly oblivious to the trials the Baudelaire children go through, ends the melancholy song with a smile on his face, reminding us that he'll be just as useless to the three orphans in the next season as he was in the first. But there's no denying that the vocals were top -notch, so props to the entire cast for having great voices. Though, with Neil Patrick Harris leading the charge, are we really all that surprised? Plus, it implies that there will be a second season (though nothing has been made official yet).

You can watch the musical number for yourself when you watch A Series of Unfortunate Events, which is now streaming on Netflix.