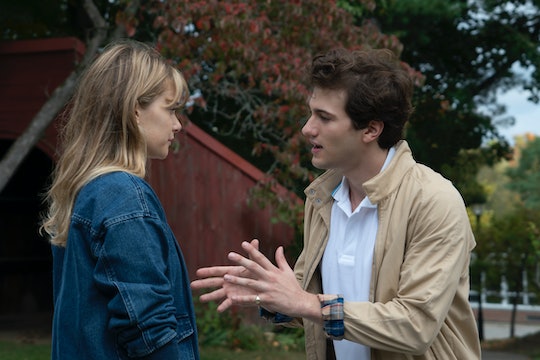 A Lot Of Shows Are Based On *Something* But What About Netflix's 'The Society'?

With all the recent superhero and graphic novel adaptations hitting screens lately, it's hard to know which stories have been culled from the pages of a comic. You know your Marvel and DC characters were comic book characters, but what about some of the others you see on TV that have that "comic origin story" feel? For example, it might be hard to tell if The Society is based on a comic book.

Though the 10-episode series was inspired by a book, it wasn't a comic book to begin with. The Society is actually a modern take on the 1954 novel by William Golding, Lord of the Flies. Sound familiar? The book is about pre-adolescent boys whose plane crashed and left them deserted on an island. It's a classic tale about "conflict between the human impulse towards savagery and the rules of civilization which are designed to contain and minimize it," according to Grade Saver, and one of the most talked about books of all time. In fact, it's still one of the top books read and dissected in schools. The main premise of The Society may not be exactly like Lord of the Flies, but there are some major resemblances that'll have you cracking the old book open for a re-read.

In the Netflix series, a group of teens are "mysteriously transported to a facsimile of their wealthy New England town, left without any trace of their parents." That alone wouldn't be enough to compare to the classic, but when you add how the teens have to figure out how to navigate hierarchies, form alliances, and make their own society to survive, the similarities become crystal clear. It's not so much a retelling as a nod to the iconic book that uses the same kind of allegory — a way of explaining life through metaphor. Basically, it's a show you can relate to. We're all human, fighting for survival in our own ways.

According to showrunner and series creator, Chris Keyser in an interview with Teen Vogue there's an added twist to The Society compared to Lord of the Flies, explaining his version is in modern civilization. "So the questions aren't what will I eat and how will I find shelter. The questions are things like: who makes the rules, how do we keep ourselves safe from each other, how do we protect the weakest among us — who owns the stuff all around us?" He went on to say he didn't intend to "teach lessons, but ask big questions about human nature," which I gotta admit I think about all the time anyway.

Chris Keyser is perhaps best known for his Party of Five days, but combined with executive producer, Marc Webb (500 Days of Summer, The Amazing Spider-Man), and stars like Kathryn Newton, Gideon Adlon, and Sean Berdy, there's little The Society doesn't have going for it — except that it's not based on a comic. Is that really a bad thing?

In case you're wondering where The Society is going, (and if it will wind up as dark as Lord of the Flies) Netflix noted, "Their newfound freedom will be fun... but it will also be very dangerous. As they struggle to figure out what has happened to them and how to get home, they must establish order and form alliances if they want to survive."