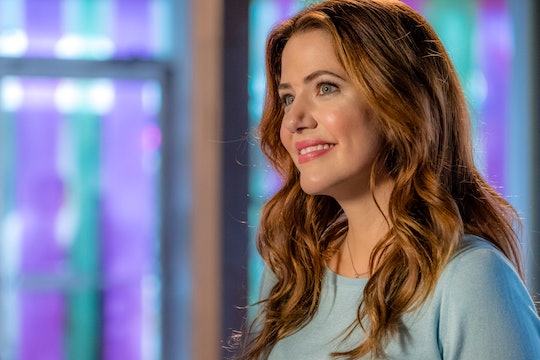 This Hallmark Original Is The *Sweetest* Thing You'll Watch All Weekend

It's spring, which means we're getting ready to enter into a whole new season of Hallmark movies — one of my favorite guilty pleasures. But as addictive as these love stories are, I can't help but wonder if any of these tales ever stem from real life. So if you find yourself flipping to the Hallmark channel this Saturday night and wondering, if The Sweetest Heart is based on a true story, just know you aren't alone.

Unfortunately, this particular film — which debuts on Saturday, March 17 at 9 p.m. ET — appears to be a complete work of fiction. But that doesn't make it any less fun to watch, laugh, and cry to with a loved one (or at least someone who won't judge your extreme emotional reaction). Hallmark movies are known for being a little sappy, completely over-the-top, and perfect for enjoying with a glass of wine or maybe just a ton of sweets. This is a judgment free zone, everybody.

The Sweetest Heart centers around the character of Maddie who is, naturally, caught between two attractive men who both love her. Ah, the classic dilemma. According to the movie's official description, Maddie is trying to save her flailing cupcake business (of course she has a cupcake business), but with the help of a "handsome investment banker" suddenly all her luck turns around in every aspect of her life. But then Nate, her first love, unexpectedly returns home after 14 years and Maddie has to choose. Does she want to be with the new guy that seems to have turned all her luck around overnight? Or should she be with the "man she never stopped loving?"

To be honest with you, this plot sounds so familiar that it might as well be a true story. Maybe there once was a woman who had moved on from her first love and met someone new until many years later she has to decide between them. This was the basic plot of Sweet Home Alabama, which is a movie so charming and lovable that I choose to believe that it's a real story (it's not). So no, it's not as if the writers of this movie heard of some small-town newspaper story in which this happened and decided to write a Hallmark movie about it.

The writer, by the way, is a woman named Nicole Baxter, who, according to her IMDB profile, has writing credits on a few other Hallmark movies. Baxter has also written Romance at Reindeer Lodge, Love at the Shore, and Love at First Bark. So clearly she has found a genre and an outlet that works for her. It turns out that the people starring in the movie aren't exactly strangers to the genre either. The lead actress, Julie Gonzalo, has been acting for decades, and that includes doing a few other Hallmark movies as well.

Gonzalo starred in the fall movies Falling for Vermont as well as Pumpkin Pie Wars in which she (you guessed it) falls in love in an unbearably cute setting. But she's also been in some movies that you may have heard of before, including a personal favorite, A Cinderella Story — the one starring Hillary Duff — in which she played mean girl, Shelby. Chris McNally, who plays Nate in The Sweetest Heart, is an even more experienced Hallmark movie actor, having acted in several just over the past few years. Basically, it looks like the Hallmark movie world is kind of a small place.

So no, The Sweetest Heart is not based on a true story, nor is it based on anything else other than a fairly basic general plot. But if you're the type of person who unabashedly loves Hallmark movies (we're the best people) then don't let that stop you from enjoying the heck out of this cute little springtime romance. And who knows, maybe this kind of plot could happen someday.