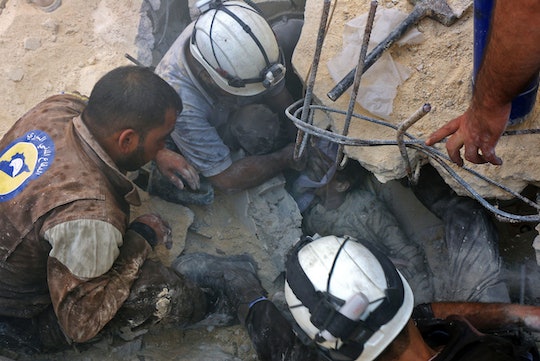 Is The US Helping Aleppo At All? The Trapped Citizens Need Support

The world watches in horror as the final surviving residents of the Syrian city of Aleppo are starved out of their homes and executed in the streets. Some may wonder if the U.S. is helping Aleppo at all, because although the nearly six year long civil war in Syria doesn't directly affect the U.S., it's a serious humanitarian crisis. It's a complicated war, with local rebels fighting against President Bashar al-Assad's regime, which is aided by Iran and Russia, and ISIS rising up to fill in the gaps. But, according to The Wall Street Journal, the U.S. military presence in Syria is scant; there are only 300 U.S. military troops currently in Syria, there to train local forces. However, Defense Secretary Ash Carter recently announced that the U.S. would deploy an additional 200 troops, but they'll be sent to the city of Raqqa, the home base of ISIS.

Russia's official position is that their presence in Syria is only to fight terrorists, but they're known to be aligned with Assad's regime, and have been accused of attacking civilians, even going so far as to bomb hospitals. While the U.S. has attempted to negotiate with Russia over Syria, on Tuesday, Russian Foreign Minister Sergey Lavrov told reporters that he was "tired of hearing this whining from our American colleagues" regarding a cease fire in Aleppo, according to the Independent.

On Wednesday, White House press secretary Josh Earnest told reporters, "It’s offensive to somehow suggest that the United States government and the world is not doing anything," according to The Hill. Earnest pointed out the diplomatic efforts the U.S. has put forth in ending the conflict, and noted that "No one has put forward an alternative suggestion for what we should now be doing." Six years of such negotiations have failed to yield results, yet Earnest argued that "if there actually were a military solution to this problem, the commander in chief wouldn’t hesitate to implement it."

The U.S. has also provided nearly $6 billion in humanitarian aid to Syria since the conflict began, providing funding to the World Health Organization, the Red Cross, several branches of the United Nations, and other charities. Funding relief organizations certainly won't stop the war, but at least it can help the innocent victims who are living through it. The United Nations Human Rights Council, the Syrian Civil Defence (also known as the White Helmets), and UNICEF are all accepting donations.