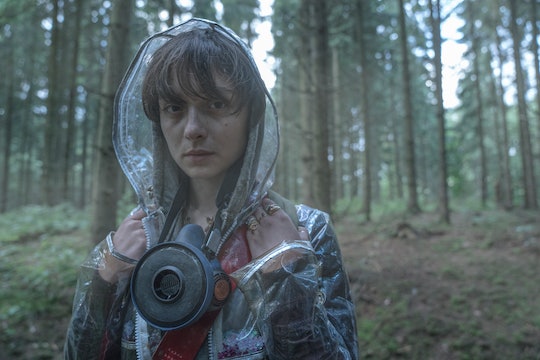 This New Netflix Series Will Make You Terrified Of Rain

Netflix's newest thriller series The Rain tells the story of the end of the world. A virus transmitted by the rain has killed nearly all the people in Scandinavia and the remaining survivors must join forces to keep themselves alive. But how plausible is the inciting event that sets the series in motion? And, perhaps more importantly, is the virus real on The Rain?

According to a review of the show in The Hollywood Reporter, the toxic rain in the series causes its victims to go feral before it eventually kills them. As the years pass, all water becomes contaminated so there's no escaping the virus. It seems fairly clear that the story is fictional: there's never been a poison downpour that wiped out half of Denmark's population, or a fatal drizzle that turned people wild first. Like many other dystopian survival stories, it appears to be more about how people make do once the world as they know it is gone for good. Whether life is extinguished because of unforeseen weather or a zombie outbreak, the outcome is the same. The rain is a narrative device to bring about the apocalypse, not a reality. Which is a relief — no one needs one more thing to worry about.

Water can carry disease, of course, even if the resultant sickness doesn't quite resemble whatever's going on on The Rain. The National Institute of Environmental Health Sciences gave a rundown of some of the possibilities, including pointing out that there can be an increase in water-transmitted diseases after a storm. On the NIEHS website, it says:

Waterborne diseases are caused by a variety of microorganisms, biotoxins, and toxic contaminants, which lead to devastating illnesses such as cholera, schistosomiasis and other gastrointestinal problems. Outbreaks of waterborne diseases often occur after a severe precipitation event (rainfall, snowfall).

BGR reported that research from the International Society for Microbial Ecology Journal indicated that Earth's atmosphere really lends itself to the transmission of viruses. Those pesky infections can get swept up into the air by the wind and then come back down with the weather. Virologist Curtis Suttle of the University of British Columbia was quoted as saying:

Every day, more than 800 million viruses are deposited per square meter above the planetary boundary layer — that's 25 viruses for each person in Canada. Roughly 20 years ago we began finding genetically similar viruses occurring in very different environments around the globe. This preponderance of long-residence viruses traveling the atmosphere likely explains why — it's quite conceivable to have a virus swept up into the atmosphere on one continent and deposited on another.

Viruses can be carried by water, and more specifically by precipitation, which might make the circumstances of The Rain feel a little bit more plausible even if they are taken to extremes. It isn't just one downpour that causes the horrifying situation its young protagonists Simone and Rasmus must learn to navigate. Six years pass in the Netflix show while the siblings stay safe but isolated in a bunker and six years of viral rain could definitely have an impact on the environment as a whole.

The effects might not be quite so drastic or immediate, but there is some precedent for the idea of an illness becoming widespread in this way. Like a lot of fiction that looks at the worst case scenarios of post-apocalyptic Earth, there is a seed of something realistic in The Rain but it's exaggerated for effect. Perhaps that will make its ominous tone hit home more effectively for viewers, though there's no need to be too concerned. At the end of the day, it's all just fiction.