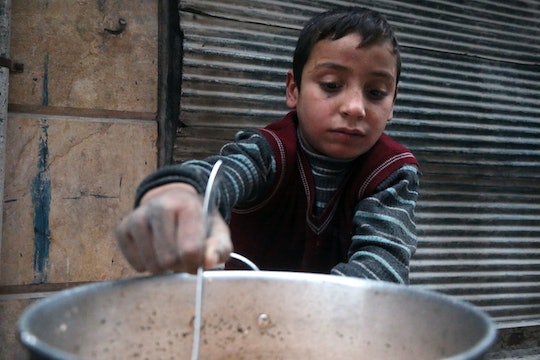 Is The War In Aleppo Over? A Cautious Agreement Between Forces Has Been Reached

After a long 48 hours that the United Nations called a "total meltdown of humanity," Syrian rebel groups and Russia, with the help of Turkey, negotiated a ceasefire early Tuesday afternoon that might mean that the war in Aleppo is over. It's not time yet to celebrate, since the agreement might not last. But Russia has stopped bombing the city, on behalf of Syrian President Bashar al-Assad for now.

The agreement means that the rebels, comprised of diverse, sometimes opposing, groups that have been trying to oust Assad since 2011, in the wake of the Arab Spring, will be allowed to leave the ravaged city. These insurgents are expected to start evacuating the city on Wednesday morning, along with their families and any of 100,000 some civilians who have sympathized with them. But just because the Syrian government has "won" Aleppo, the largest Syrian city — if after everything, one can even call it that — doesn't mean that the war is over. Insurgents continue to fight in other regions of the country.

"We appear to be witnessing nothing less than an all-out effort by the Syrian government and its allies to end the country's internal conflict through a total uncompromising military victory," U.N. Secretary-General Ban ki-Moon told the Security Council on Tuesday. There were reports of pro-government forces shooting civilians on the spot.

According to CNN, civilians received text messages from rebel groups telling them that the cease fire had been reached and that they should prepare to flee the destroyed city through safe passages to Aleppo's northern and western countryside. But Vitaly Churkin, a Russian ambassador, told the United Nations Security Council that the ceasefire was for the fighters to leave the city. "The civilians, they can stay, they can go to safe places, they can take advantage of the humanitarian arrangements that are on the ground. Nobody is going to harm the civilians," Churkin said.

Syrian civilians and their advocates might not take much solace in that statement, since for the past two days — and really for almost five years — civilians have been caught in the middle of increasing fighting and have been perishing in devastating numbers. Assad's siege of the city meant that they were cut off from the outside world, with no food or medical services. Humanitarian aid could not get in or out. Pro-Assad forces reportedly slaughtered civilians over the course of the past few days in an effort to force rebel groups to surrender.

Syrian Lt. Gen. Zaid al-Saleh said earlier on Tuesday that the rebels would have to "surrender or die" if they wanted the bombardment of eastern Aleppo to stop. Luckily, the rebels chose to stop the attacks. A commander with the Jabha Shamiya rebel group told Reuters that it was a "moral victory" for their side, if not a tactical one. "We were steadfast ... but unfortunately nobody stood with us at all," he said.

If anything, the ceasefire is the beginning of a whole different level of humanitarian crisis as civilians are displaced from eastern Aleppo and head out into the world, with really very few options in terms of where to go, or where to find food, clothing, and medical assistance.

Hopefully Syrian civilians can find some semblance of peace during the ceasefire, because the road ahead for them is very uncertain.

You can help Syrian refugees by donating to one of the many non-profits that assist refugees in Syria and abroad.