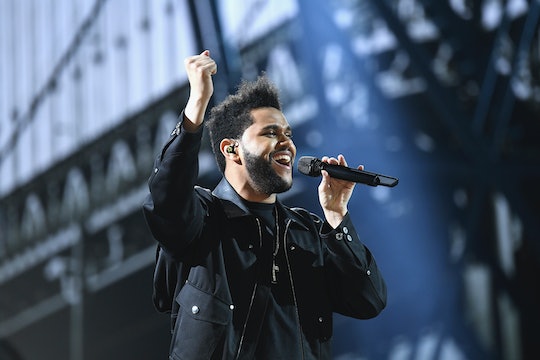 Is The Weeknd Single? He & His Ex Reunited At The Victoria's Secret Fashion Show

The Weeknd and Bella Hadid have been rumored to exchange goo-goo eyes at each other during the Victoria's Secret Fashion Show, but are the two back together? It's hard to tell. Breakups are always difficult, and it's rarely ever a clean break when you leave someone. Regardless of a relationship status, the two still seem very much attached to one another. So, if you're watching the Victoria's Secret Fashion Show and see the two former flames reunite, you may wonder if The Weeknd is still single.

Well, wonder no more, because we seem to have an answer to the question at hand. Yes, "The Starboy" is still single as a pringle, so it seems, following his breakup with Hadid. But that doesn't mean his feelings for Bella have magically evaporated over night. According to a People magazine source:

“Their schedules have been too hard to coordinate and he is focusing on finishing and promoting his album. They still have a great deal of love for one another and will remain friends.”

A part of her caption read as such: "I can't believe it! I was smiling SO HUGE on the inside I promise!!!! The most fun and nerve racking experience of my life but I wish I could do it over and over and over again!!!!! Thank you @theweeknd for being the best and most incredible performer on the planet. You KILLED it, as always."

Bella has said only good things about her former lover to Entertainment Tonight as she had her hair curled for the VSFS. "He's the best, we're still great friends," Bella assured. "I'm excited. It's his second show, so I know he's gonna kill it." The Weeknd reciprocated her positive vibes when watching her as she walked the runway with confidence.

Personally, I believe that the couple put their love on ice until their schedules allow them to reheat their feelings for one another. They've been together for almost two years, and a bond after that much time together doesn't just disappear because of calendar conflicts.

Who knows what the future has in store for these two, but until they, and we, find out, we can expect some new songs from to help us all fly solo with swagger, like the artist himself.