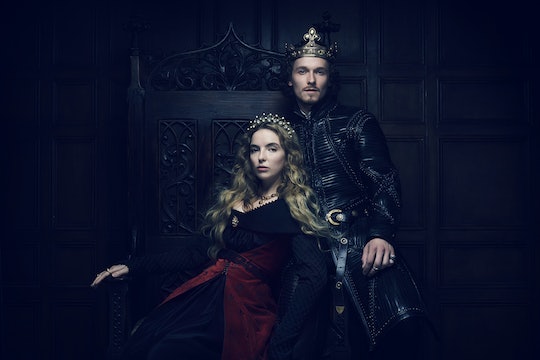 'The White Princess' Is Full Of Historical Figures

The new show is based on the novel of the same name by Philippa Gregory, one of the biggest names in the historical romance genre. As with most historical romance and general historical fiction, the author uses known larger events from the past, embellishing, dramatizing, or straight-up making details up where necessary in order to make it a more cohesive and traditionally engaging story. So, the answer to whether the upcoming Starz series is based on true events is, in a word: mostly.

The drama takes place in the 15th century, during the tumultuous War of the Roses. As a follow up to The White Queen (Gregory's earlier novel in the same Cousin's War series, on which the 2013 BBC miniseries, The White Queen, was based), Thee White Princess picks up three days after the events of its predecessor, according to Deadline. It follows the story of Elizabeth of York ("Lizzie"), the titular princess who is forced to marry into the House of Tudor (her family's enemies) after her alleged uncle/lover, King Richard III, is killed in battle by Henry Tudor, the first monarch of the Tudor line.

Historically, all of the larger pieces of the story really happened. Henry did defeat Richard in battle, becoming King Henry VII, and afterwards, Henry and Elizabeth did marry. What's unique about The White Princess is the fact that it's told chiefly from the perspective of the women at the heart of the story, rather than the royal men who are normally the focus of the history books — Lizzie, Lady Margaret Beaufort (Henry's mother), and Dowager Queen Elizabeth Woodville (Lizzie's mother) are the de facto main characters, facing off to keep their respective families in power. Super Game of Thrones-y.

The minutiae are where Gregory took some creative license. Because we're dealing with people who lived hundreds of years ago and didn't keep meticulous records of their emotional inner and private lives, it takes some amount of guesswork and imagination to piece together how things happened "behind the scenes." For what it's worth, a Huffington Post book review of The White Princess noted, "The license Gregory takes with these characters is believable as they fit in with the overall pattern of England’s history at this time."

There's also the matter of separating out historical fact from rumor. In Elle's guide to the new series, they addressed the fact that several pieces of the story are real-life mysteries — like whether Lizzie and her uncle Richard III were actually incestuously involved prior to his defeat by Henry and what actually happened to Lizzie's brothers (who were rumored to have been either killed by one of numerous suspects or smuggled out of their imprisonment in the Tower of London, because they represented threats to Tudor rule).

In any event, whether The White Princess is meticulously historically accurate or not, only one thing matters — whether or not it's an entertaining show. Based on the hype prior to its release, my hopes for this one are high.