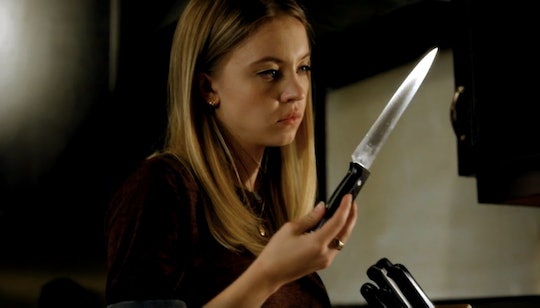 Lifetime has built its reputation on salacious movies of the week that serve up all the best kinds of drama, from mistaken identities to strangers with malicious intent. They also base quite a few of their films on true stories, making it difficult to tell sometimes which have been snatched from real life and which are totally invented. Their newest offering, The Wrong Daughter, definitely seems too absurd to be real, but is The Wrong Daughter based on a true story?

More Like This
Angela Kinsey's Daughter Dressed As Her Character From 'The Office' & Wow, The Sass!
20 Great Movies About Fathers & Sons That Will Make You Laugh & Cry
Kevin Hart Plays A Widowed New Dad In Netflix’s Fatherhood
Stop What You're Doing & Show Your Kids The 'PAW Patrol' Movie Trailer Right Now

According to the official synopsis, the movie follows couple Kate and Joe as they begin to consider different fertility methods to conceive a child. However, their plans are thrown out of whack when the daughter Kate gave up for adoption 17 years ago suddenly appears. But the girl, named Danica, isn't who she purports to be: she's actually an imposter who will, per the description, "do anything, even kill, to get the mother's love she never had."

As incredible as The Wrong Daughter sounds, there's no sign from Lifetime's promotional material that it's based on a true story in any way, shape, or form. That probably comes as no surprise to most viewers, because its plot certainly edges into the ridiculous.

The preview for the movie hints at all the dark depths it gets to after Sydney Sweeney's Danica shows up out of the blue to take part in some mother-daughter bonding with Cindy Busby's Kate. First it's just innocent lurking behind the door of the fridge with gigantic Margaret Keane eyes, startling Kate as she gets what I can only assume is a delicious snack, but it graduates to more sinister territory from there. Soon Danica is contemplating knives ominously, destroying the landscape work Kate likely paid a pretty penny for, and holding Kate's real birth daughter hostage.

It's well-trod territory for Lifetime, but it's not exactly grounded in reality. When speaking to My Devotional Thoughts, Busby described the film (which was then titled Love Me Or Else) as "more of a psychological thriller, as a lot of Lifetime movies are. They keep you on the edge of your seat, and you wonder what's gonna happen next." She went on to say the film had some "intense moments," which seems clear from the knife-wielding, but she gave no indication that there was any truth to the tale.

The idea of someone who is supposed to be close to you, like a long-lost daughter, actually turning out to be a murderous stranger is a fairly common one in thrillers and horror films. Those genres play on making the familiar unfamiliar so that they can successfully unsettle their audience. But there is some precedent in the real world. Just take a look at the 2012 documentary The Imposter, which took an in-depth look at what happened when a conman named Frédéric Bourdin infiltrated a Texas family by pretending to be their long-lost son Nicholas Barclay.

Barclay disappeared in 1994 at age 13, but when Bourdin turned up in 1997 he was somehow able to convince the family that Barclay had returned to them. That was despite some obvious discrepancies, like the fact that Bourdin had brown eyes while Barclay had blue, as well as his distinct French accent. In that instance, the situation didn't result in violence, but it is one case of a stranger impersonating a missing family member for their own uncertain reasons.

Even though The Imposter is not a direct inspiration for The Wrong Daughter, it proves that there can be a hint of truth in even the wildest of stories. It doesn't make the Lifetime movie any more realistic, but the possibility does enhance its creepiness.