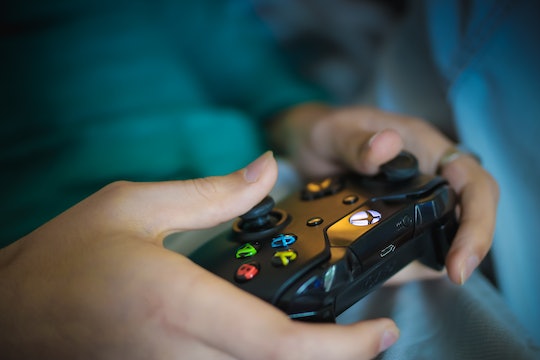 Is The Xbox One X Appropriate For Kids Under 5?

On Sunday, Microsoft finally unveiled the project it's been working on over the last few months. The Xbox One X — previously known only as Project Scorpio — will be released in November and is being touted as the smallest, most powerful Xbox out there. It's already set to be a top item on kids' birthday wish lists this year, and children of all ages will likely be clamoring for the console by the time the holidays roll around. But is the Xbox One X appropriate for kids under 5 years old?

UPDATE: In an email to Romper, a Microsoft spokesperson stated, "Xbox One X is a member of the Xbox One family of devices. It’s up to the consumer to pick what device is best for them and their family. Our fans are a diverse audience with varying interests, gaming preferences and needs. At E3 2017, Team Xbox is continuing to build on its promise to deliver a range of experiences that make Xbox a place where everyone has fun. This year, we introduced 22 console-exclusive games, providing something for every gamer, with Minecraft and 'Super Lucky’s Tale' being just two of the many E for Everyone games Xbox offers. Our new Copilot feature is a great option for young children to utilize these games. Copilot allows two controllers to act as if they were one, making Xbox gaming more approachable and flexible for gamers with all abilities including parents who want to bond with their kids. We’ve also brought the family timer feature to Xbox One as screen time limits, updated for today’s digital family. Set daily time allowance and limits for each child—your Xbox One will pick those limits up and enforce them whenever the child is signed in. You’ll be able to turn on and set Xbox One and PC screen time limits separately for each child."

EARLIER: Romper reached out to Microsoft for comment, but did not hear back immediately. However, if your child is 5 years old or younger, the Xbox One X is probably not the best investment to make yet. The Xbox One X will be full of powerful features packed into a small, sleek device, and it's set to handle complex games with realistic graphics. So far, it seems like Xbox is mostly marketing the device towards teens and adults.

According to Fractus Learning, a company that recommends games and tools for children, even the earlier Xbox One is really only appropriate for kids age 7 and up. Common Sense Media's list of age-appropriate games for the Xbox One also only includes games for children over age 7.

Considering that the Xbox One X will retail at a pricey $499, many parents might also consider the Xbox One X a little too expensive to be putting into a toddler's clumsy hands. On top of that, the sleek graphics and processing power found in more high-end Xbox products — like the Xbox One X — are features probably lost on younger kids.

So what gaming console can you buy your kids instead? Common Sense Media recommends a Nintendo Switch for younger audiences, while Parenting.com suggests parents consider a Nintendo 3DS, a Nintendo Wii, or a Sony Playstation 3 (with its Wii-like Move wand). If you're not sold on a gaming console, you could also consider purchasing an iPad, which has plenty of games available for kids of all ages in its App Store. Either way, there are plenty of gaming options out there for younger children.

If you're curious about the Xbox One X because you might like one for yourself (hey, you can still pretend you're buying it for your kid's sake in order to justify the cost, right?), you can learn more about its features compared to other consoles on Xbox's website. It's slated to hit stores on Nov. 7, so make sure you put it on your wish list now and get one before the holiday rush hits.