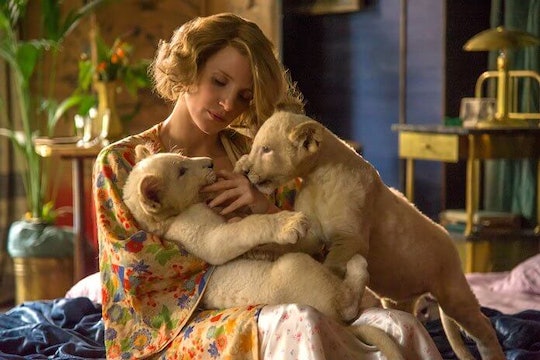 2016 has been a busy year for Jessica Chastain. She had a leading role in the May-released The Huntsman: Winter's War. Her upcoming drama-thriller Miss Sloane had its world premiere at the AFI Fest on November 11, is set for wide release on November 25, and is garnering Chastain some awards buzz. But it's her upcoming 2017 film that's most intriguing. After the trailer dropped today, many were wondering what Chastain's new movie The Zookeeper's Wife is about.

The movie is directed by Niki Caro, a New Zealand director and screenwriter who also directed and wrote the acclaimed Whale Rider back in 2002. The Zookeeper's Wife follows the story of two married Warsaw Zoo keepers who saved animals and humans during World War II by hiding them from the Nazis in the animal cages. Chastain plays the titular role of Antonina Zabinska and has been attached to star since Caro signed on to direct in April 2013, shortly after Chastain's Oscar-nominated turn in Zero Dark Thirty.

"Set immediately prior to the Nazis invading Poland in 1939, the pic tells the true story of Antonina Żabińska (Chastain) and her husband, Dr. Jan Żabiński (Johan Heldenbergh), who run the Warsaw Zoo. After the Germans arrive, the are forced to report to the Reich’s newly appointed chief zoologist (Daniel Brühl) and covertly begin working with the Resistance – and put into action plans to save lives out of what has become the Warsaw Ghetto as the risk to their own lives grows."

The trailer spans the time from before the Nazi invasion, when Antonina leads a happy and peaceful existence with her family and the animals they care for, to the Żabińskis decision to hide the Jews whose lives are threatened by the Reich. Brühl, who's no stranger to playing terrifying Nazi antagonists (see also: Inglorious Basterds' Fredrick Zoller), looks to be playing yet another compelling villain.

The film's script was written by Angela Workman. It's based on the bestselling non-fiction book by Diane Ackerman based on the Żabińskis true story and published in 2007. The Zookeeper's Wife is currently set for a March 2017 release.