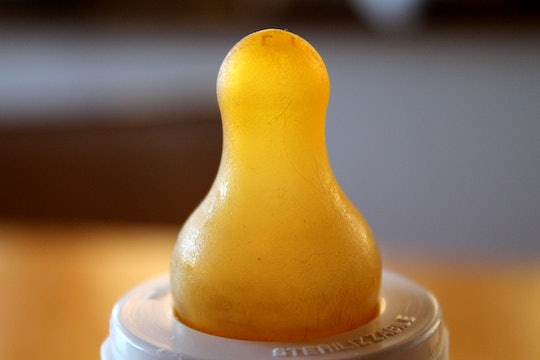 There's A Huge Formula Gap In The US

By now, you've probably heard of the diaper gap. It's the gap between how many diapers babies actually need each day and the number of diapers low-income parents can actually afford to buy, forcing families to change their babies less often. It turns out diapers aren't the only baby necessity many families are struggling to provide. Food scarcity is just as real. Is there a formula gap? Just like the diaper gap, poor families in America are trying to stretch their babies' food to make ends meet.

It's called "formula stretching," according to NBC News, and there are more parents trying to make their baby's food last longer than you might realize. According to a 2012 study, one inner city clinic for children said that about 30 percent of parents who brought their children in were watering down their formula because they didn't have enough for the entire month, NBC News reported. About 65 percent of the 144 parents surveyed in the study were receiving assistance from Medicaid, food stamps, and were being supplied with formula through a federal program called WIC, which, according to the agency, will provide formula for mothers based on a calculator that determines how much a family needs. But that still isn't enough for many families.

Babies who consistently don't have their nutritional needs met can develop issues including "failure to thrive" symptoms and trouble with cognitive thinking and behavior control, NBC News reported.

Breastfeeding seems like a cheap alternative to formula feeding, but for low-income mothers without paid leave who need to get back to work, breastfeeding isn't a realistic solution. But, according to a study from Chapman University, there is a racial aspect to breastfeeding versus formula feeding as well, Science Daily reported.

Jennifer Hahn-Holbrook, Ph.D., assistant professor in psychology at Chapman University and co-author on the study said about the results, according to Science Daily:

Black mothers were nine times more likely to be given formula in the hospital than white mothers. This fact alone accounted for about 20 percent of the racial disparity in breastfeeding duration between black and white mothers. In-hospital formula introduction is something that hospital policy makers and breastfeeding advocates can seek to change, whereas some other factors that led to breastfeeding disparities in our study are not so easily addressed.

Hispanic mothers, on the other hand, have higher rates of breastfeeding than black or white mothers, because they are more likely to have a family member who breastfed. So, in addition to boosting funding to provide mothers who rely on WIC (Women, Infants, and Children nutrition program for formula), there is more that can be done to encourage breastfeeding, which is a far cheaper alternative to formula.

Dr. Chelsea McKinney, another author of the breastfeeding study, said change is possible, according to Science Daily:

And we hope to see racial and ethnic disparities in breastfeeding diminish as more hospitals serving low-income populations become 'baby-friendly' and encourage breastfeeding through close maternal-infant contact after birth and discouraging formula use.

While white mothers are cheered on to breastfeed, mothers of color are getting different messages from the time their children are born, according to the New York Times, driven by the $3 billion formula industry.

There is a commercial and promotional aspect to it, that — not meaning to be a pun — feeds in to this. The free supplies, the direct, indirect messages that formula is as good as or just like breast milk, messages that get conveyed either directly or indirectly that your milk isn’t good enough.

The Chapman University study also found that black mothers were nine times more likely to get formula at the hospital than white mothers, according to Science Daily.

One thing mothers with abundant breast milk can do to help close the formula gap is donate their extra breast milk to a local milk bank or organizations like Human Milk for Human Babies. The La Leche League International, is a good resource for breastfeeding support.

Correction: a previous version of this article stated the La Leche League accepts breast milk donations, which it does not. La Leche offers support and resources for breastfeeding mothers.

More Like This
'Operation Fly Formula' Begins With 78,000 Pounds Of Baby Formula
This Free Website Connects Parents Who Need Formula With Those Who Have It
13 Celebrity Parents Who Also Raise Chickens At Home
Jennifer Lawrence Just Kinda, Sorta Revealed The Sex Of Her First Baby