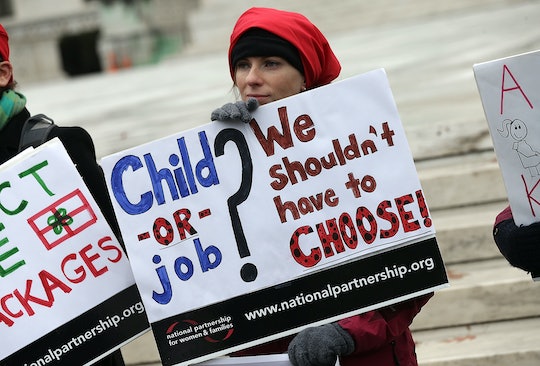 "It's not prison. You can quit." That's the message South Dakota state Rep. Wayne H. Steinhauer has for pregnant people seeking on-the-job accommodations. Earlier this week, Steinhauer (R-Minnehaha) was among eight male lawmakers who blocked a state bill requiring employers to provide reasonable accommodations during and after pregnancy. During a Monday hearing, Steinhauer said pregnant workers should "get the heck out of there" if their bosses are not compliant. (Steinhauer has not responded to Romper's request for additional comment.) But quitting is not a viable option, which is why there are fairness acts on the books. So is there already a law protecting pregnant workers from discrimination? Yup — two, actually.

The 1978 Pregnancy Discrimination Act amended Title VII of the Civil Rights Act of 1964 to explicitly ban sex discrimination on the basis of pregnancy or childbirth. That means they can't be denied employment, fired, retaliated against, or refused adjustments because they're a new parent or soon-to-be parent. The 1990 Americans with Disabilities Act also provides some protections to pregnant workers if they cannot temporarily perform their job duties temporarily because of a medical condition related to pregnancy or childbirth. The U.S. Equal Employment Opportunity Commission affirmed these rights in a 2014 guidance for employers, which ThinkProgress noted is "the first comprehensive update since 1983."

Still, pregnancy discrimination persists. According to the National Partnership for Women & Families, nearly 31,000 pregnancy discrimination complaints were filed with the EEOC and state labor practice agencies between fiscal years 2011 and 2015. The advocacy group also reported in 2014 that more than a quarter million pregnant workers were denied accommodation requests.

Discrimination can have a profound financial impact on pregnant workers, especially people of color. As noted by Rewire, 38 percent of workers polled by job-search company CareerBuilder in 2016 said they sometimes live paycheck-to-paycheck. Pregnant workers, particularly those struggling to make ends meet, can't afford to lose their livelihood in the face of mounting medical bills. On the other hand, businesses can afford to accommodate workers, despite what corporate executives may say — a 2012 Job Accommodation Network report found that, for 57 percent of employers, providing worker accommodations "cost absolutely nothing." Getting sued, though, costs a lot.

There has been a bipartisan effort to pass the Pregnant Workers Fairness Act to help strength workers' rights, but the federal legislation continues to be stonewalled in Congress. States have taken it upon themselves to pass their own versions of the PWFA. So far, according to A Better Balance, 18 states and Washington, D.C. have enacted legislation that mandate longer or frequent breaks, private nursing rooms (that aren't bathrooms), modified work schedules, and other necessary accommodations for pregnant workers. And more and more state lawmakers are introducing similar bills.

What Steinhauer said on Monday is not surprising. After all, in 2004, President Donald Trump called pregnancy as an "inconvenience" for businesses, according to NBC News. Their words are symptomatic of a patriarchal culture that demands — nay, forces — people to bear children, but continually refuses to provide the support and resources needed to raise them. That's why legislation such as the Pregnant Workers Fairness Act is vital in safeguarding the rights of new and soon-to-be parents. Unfortunately, though, this current administration extinguishes any hope of equity.

More Like This
Sex And Mom Guilt: When I Date Someone New, Am I Cheating On My Kids?
9 Reasons Why Some Women Can't Breastfeed
Chrissy Teigen Reveals She’s Pregnant, Expecting Again With Husband John Legend
Chrissy Teigen Is Ready For Her Bump To "Just Be Huge" With This Pregnancy