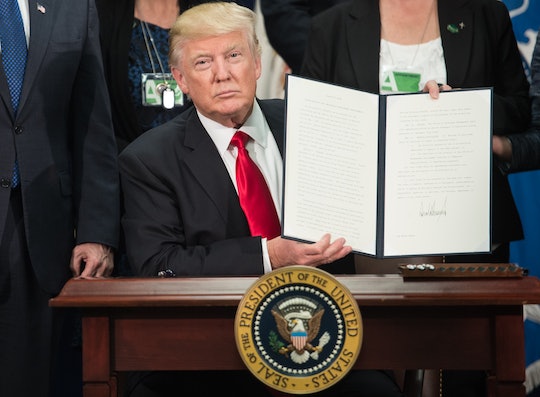 Is There A Limit On Executive Orders?

As the Chief Executive of the United States, presidents have several ways to direct the actions of the executive branch of government and essentially make policy without input from Congress or the courts, the most common of which are executive orders. In the first week of his presidency, Donald Trump has already signed 12 executive orders on issues ranging from healthcare to immigration, according to PBS Newshour. Is there a limit on how many executive orders a President can sign? The only limitations on executive authority are those imposed by Congress or the Supreme Court.

She added that each executive order must also go through the Department of Justice for a vetting process.

In the first handful of days in office, Trump has signed 12 executive orders so far. He's started the job of dismantling Obamacare, reinstated worldwide restrictions on abortion through the "Mexico City Policy," pulled the U.S. out of the Trans-Pacific Partnership trade deal, and announced draconian immigration restrictions and began clearing the path for building his promised border wall, among other actions, according to Politico.

To keep historical pace, Trump will likely sign many more executive orders to try and set the American government's agenda without input from Congress or the American people.