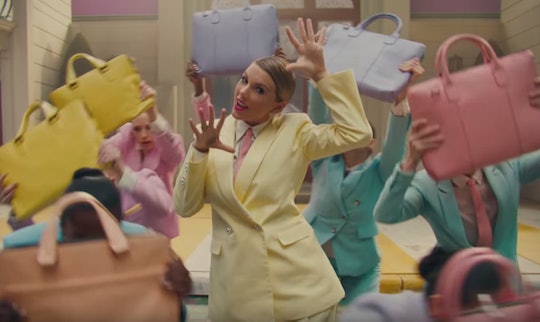 If you're a Taylor Swift fan — even in the slightest — then you're probably still reeling from the release of her newest music video. The single "ME!" featuring Panic! At the Disco's Brendon Urie is pretty epic. It's beautiful and quirky. Not to mention catchy AF. But alas, Swifties are never fully satisfied. Because about now, plenty of fans are probably wondering: Is there a new Taylor Swift album coming too?

T-Swift's "ME!" video dropped at midnight on Thursday night, according to People. And unsurprisingly, it went viral almost immediately. (It currently has more than 29 million views!) The highly-anticipated single comes after Swift first teased big news o April 13 — when a countdown showed up on social media and billboards across the globe. She continued posting clues via social media, culminating with Thursday night's big reveal. And let's just say the whimsical video didn't disappoint.

The release of "ME!" came mere hours after Swift revealed the song's title on ABC during the NFL Draft. “‘ME!’ is a song about embracing your individuality and really celebrating it and owning it,” she explained, according to People. “With a pop song, we have an ability to get a melody stuck in people’s heads and I just want it to be one that makes them feel better about themselves.”

Although featuring Brendon Urie might have been surprising for Swifties at first, it also makes a lot of sense — considering his recent resurgence with "High Hopes." And apparently, Swift told Apple Music that she's been a long-time fan.

I've been a fan of his since the early Panic! At the Disco stuff. It's so exciting getting to make a song and video with someone who is that committed as performer It just made it so much more playful and wild and mischievous having someone who is that excited about making music. It really just lifts everything else up. So I really hope you like the new song ME!

So back to the original question: Is there going to be an album? Rolling Stone is convinced there is for a number of reasons. "The Taylor Lead Single is a genre unto itself, and 'ME!' has all the signs: It’s campy, it’s bubbly, it’s got a spoken-word interlude (“hey kids, spelling is fun!”) and a video loaded with in-jokes," writer Rob Sheffield wrote. And I mean, he does make a solid argument.

If you need solid proof that TS7 is coming, then look no further. Along with releasing her new music video, Swift's website got a major overhaul — including new merchandise, according to PopSugar. In a totally low-key way, though, it was also confirmed that a seventh album is indeed on its way. Fans who checked out the new merch on Swift's online store probably noticed they can already pre-order her upcoming album.

Granted, there are precisely zero details about TS7 at this point. But it's totally happening, guys! To help tide you over until then, make sure to check out the Billboard Music Awards — for which Swift and Urie will open with a live performance of "ME!"