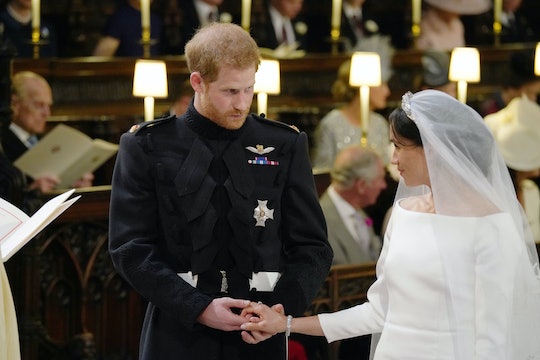 The Royal Wedding Ceremony Is Only The Beginning Of The Celebrations

In less than a day, Prince Harry of Wales and Meghan Markle will officially become husband and wife in what has been one of the most highly anticipated royal events of the year. Guests have begun to arrive for their wedding, which takes place Saturday afternoon, as final preparations are being made. But with all the focus on the ceremony, some people may be wondering: Is there a royal wedding reception, too? The answer is yes. In fact, there are two.

The first reception, otherwise known as the Queen's luncheon, takes place in the early afternoon, right after the royal wedding ceremony at St. George's Chapel, according to Brides. The Queen's luncheon is a traditional, buffet-style wedding breakfast (think of it as a really, really, really expansive and expensive brunch) that's hosted by Queen Elizabeth II and open to the 600 guests or so who will be present at the hour-long ceremony earlier that day, Brides reported.

Attendees will dine on local-sourced fare — "the freshest produce available," according to a post on Kensington Palace's website. The ingredients will come from the Queen's Estate at Windsor, as well as farms across U.K. counties, such as Kent, the palace wrote in its post.

Talking about the reception menu, Royal chef Mark Flanagan said earlier this week that this is the perfect time for Prince Harry and Markle's wedding because the spring vegetables, such as asparagus, are coming into season, Page Six reported. Flanagan continued:

We know the couple wanted us to make sure we used all of the local seasonal produce as much as possible throughout their menu, and this recent good weather is really helping us to achieve that.

Flanagan, who is overseeing a some 30-staff kitchen, also noted that the royal couple have been a part of the menu preparations for their wedding reception, according to Page Six. The royal chef said that the soon-to-be newlyweds have "tasted everything" and that "they've been involved in every detail" for the reception, which takes place at St. George's Hall at Windsor Castle.

But don't expect any wild dishes. Although Prince Harry and Markle have shaken things up with their non-traditional wedding cake — a lemon elderflower creation — the menu for the reception will still feature classic fare, Page Six reported. Flanagan explained:

We've really just been trying to let the ingredients stand proud within the dishes. There's no experimentation on Saturday whatsoever: tried and tested and predominantly classics.

Pastry Chef Selwyn Stoby and his team of bakers will take care of desserts for the Queen's luncheon, according to Brides. The sweet delicacies will include mini crème brûlée, panna cotta-topped biscuits, yellow macarons, and Windsor favorite, chocolate truffles.

The second reception is a private event hosted by Prince Charles that's held in the Frogmore House, according to Brides. The guest list is considerably smaller than reception no. 1, and thus much more exclusive. Yes, cue the drama. The Frogmore House is actually where Meagan and Prince Harry also took their engagement photos. The most exciting part of this reception, though, is the rumored entertainment. Ed Sheeran, Elton John, and the Spice Girls are all names that've been dropped in the last few weeks, according to Brides, and still no one has leaked the truth. In the last few days it was confirmed that Elton John will indeed be singing at the wedding, it's just unclear whether he'll be singing during the ceremony or later at the reception, according to The Sun.

Needless to say, the royal wedding will be a delicious affair.