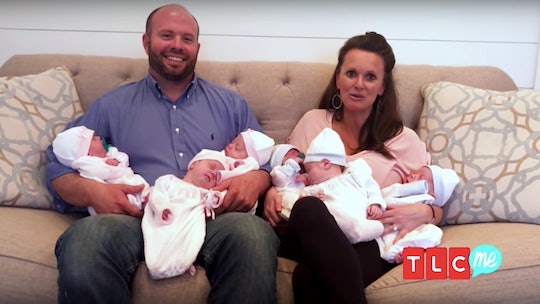 'Sweet Home Sextuplets' Is Back For Another Season

Sweet Home Sextuplets returns to TLC for Season 2 on May 28, after seven whole months in hiatus. That's a long time in toddler years. These kids could be having full conversations by now! If you don't want to wait even a few hours to catch up with the Waldrop family and see what the kids are up to, then social media is your best bet. There is a Sweet Home Sextuplets Instagram that will show you everything that happened between the first and second seasons.

Under the handle @gods_divine_nine, Eric and Courtney Waldrop share photos of their entire crew of kiddos. That includes sextuplets Blu, Layke, Rawlings, Rayne, Rivers, and Tag, as well as older brothers Taylor, Wales, and Bridge. They share throwbacks of the six babies from shortly after their birth, as well as new photos of the family posing and playing together. You can even start to see each of the sextuplets' personalities in a series of portraits with mom Courtney. The girls and boys are dressed alike in puffy pink dresses and yellow shirts respectively, but their individuality shines through. Some are all smiles, Rayne clearly already knows her angles, and a few appear politely puzzled, because they are very small and probably not wholly aware of what's going on.

Courtney and Eric aren't slacking in their Instagram upkeep. It's packed with family photos of everyone playing outside, or gathered around playground equipment. But there are even more pictures of the sextuplets — so many, in fact, that some posts give one the feeling of paging through an old-fashioned flipbook. Every milestone is celebrated with another post that marks just how much these kids have grown. And some of them are painfully adorable. Behold, sisterhood:

Whether it's babies hanging out in their own viewing chairs for a movie night or babies sitting in drawers because why not, there's no shortage of cute photoshoots happening on the Waldrops' Instagram. While social media won't give you all the ins and outs of daily life with sextuplets the way the show does, it's still a way for fans to follow the family even after the credits roll.

An exclusive sneak peek on People offered a glimpse at Season 2 that was a little more hectic than what you see on the 'Gram. In it, there were babies as far at the eye could see: Eric and Courtney were changing diapers while the older boys entertained their tiny siblings. "You have to keep your head on a swivel," Eric said. "Even though we keep them in the baby room 90 percent of the time, you constantly have to be looking. I mean, they're everywhere."

It's a lot for two parents to keep track of, but viewers will get to see how they handle their growing sextuplets in the upcoming season. With all that running around — which will only increase as the kids get more and more mobile — it's a wonder they ever got them to sit still for Instagram.