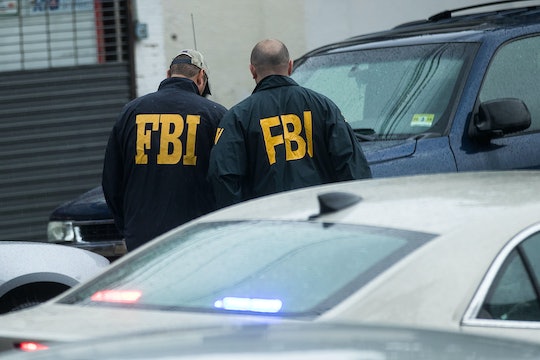 Is There A Terrorist Cell In New York Or New Jersey? The Investigation Is Ongoing

After the explosions in Chelsea, New York, and Seaside Park, New Jersey, Saturday, along with similar discoveries of undetonated bombs in Elizabeth, New Jersey, Sunday, officials are investigating whether the suspect currently in custody linked to the incidents might also be associated with a local terror cell or an international terrorist group. Is there a terrorist cell in New York or New Jersey? It's not yet clear whether the Chelsea explosion is indicative of a much larger organized terrorist effort — but it's also certainly not something that anyone is ruling out.

According to The Washington Post, police arrested 28-year-old Ahmad Khan Rahami in Linden, New Jersey, Monday after a shootout. Rahami is a U.S. citizen born in Afghanistan whose last known address was located in Elizabeth, New Jersey. According to The New York Times, police put out an alert for Rahami after he was identified on surveillance footage allegedly planting the bomb that detonated in Chelsea. His fingerprints were reportedly also found on other bombs, and it's thought that he is also linked to the backpack containing five pipe bombs that were found near a train station by two men in Elizabeth. When Rahami was located by police, he shot at least two officers, and was shot multiple times as he attempted to flee, but was ultimately arrested and taken to a hospital. Romper could not reach Rahami for comment.

With Rahami in custody, authorities are now trying to figure out exactly what his connection to the explosion is, whether he was working with others, and whether he has any ties to terrorism abroad. According to NBC News, Rahami was not on any terrorist watch lists, and hasn't so far been linked to an outside group, though little is still actually known about him. However, Rahami and his family do have a history of tension with city officials in Elizabeth, according to The New York Times, stemming from complaints about the family's restaurant, First American Fried Chicken, where Rahami worked alongside his father, Mohammed.

In 2009, after receiving complaints from neighbors about late-night noise and rowdy crowds, the city ordered the Rahamis to close each night at 10 p.m. According to The Daily Mail, the Rahamis then sued the city for harassment, claiming that they were unfairly targeted for being Muslim. The suit also alleges that other community members discriminated against them because of their faith, telling them "Muslims are trouble" and "Muslims don't belong here." Their complaint was dismissed in 2012.

Monday afternoon, New York Mayor Bill de Blasio told reporters at a news conference he thought there was “every reason to believe this was an act of terror,” according to The Washington Post, though he didn't specify whether that meant that a terrorist group like ISIS or Al Qaeda was involved. As for fears about active, local terror organizations? So far, it's not looking as though that's the case either. Speaking at the briefing, FBI assistant director William Sweeney, Jr. said there is “no indication that there is a [terror] cell operating in the area.”

At this point, it seems as though authorities are trying to unearth as much information about Rahami and the explosions as they possibly can, since there is a lot that still appears to be unknown. As of yet, no outside terror organization has taken responsibility for the attack, and there isn't any evidence that Rahami was aligned with a terror group — though that could of course change as new details come to light. For now, it sounds like it's possible that the Chelsea explosion isn't indicative of a greater terrorist cell in the New York/New Jersey area. But it's also clear that there are still far more questions in this case than answers so far.