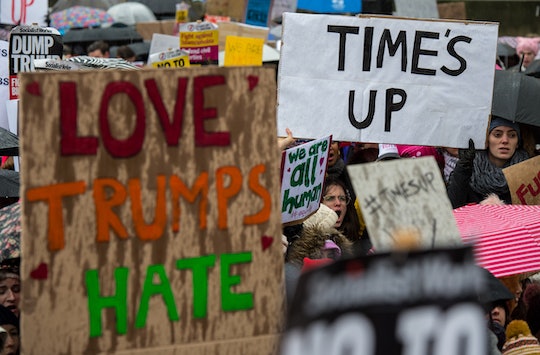 Everything You Need To Know About Phoenix's Women's March

Women all over the country are preparing to stand together for the 2019 Women's March. While many major cities have events planned (both official and unofficial), it's unclear which cities are confirmed to be participating. So if you were wondering if there is a Women's March in Phoenix, Arizona, Romper has the answer for you. Much like big cities like New York, Washington, D.C., and Houston, Phoenix has big plans to participate.

According to the march's Facebook page, the rally begins at 10am local time outside of the Capitol Museum building in Phoenix. At 10am the speeches begin, and even though the march is scheduled to start at 11am, the page notes they will not begin until the speeches have concluded.

But, the festivities do not end there! At 12pm there will be a live performance featuring dancers and the Phoenix Women's Chorus. In order to make sure the city and it's citizens and visitors are safe, authorities have already released street closure information to local news outlets. For example, NBC's 12News reports where to park (including the largest lot), if there will be food (there will), and even details of a sign making party taking place the night before.

While Phoenix's march is clearly well organized, one of the local organizers, Eva Burch, told the local news outlet that they are not associated with the official Women's March.

“We want to make sure that our march is as inclusive as possible and that we advocate for the rights and representation of all women,” Burch, who has helped organize the Phoenix march ever year since 2017, told the outlet. “Anything less is totally unacceptable to us."

Of course, this is a not-so-subtle reference to the controversy surrounding the official Women's March organization. As reported by the Boston Globe, the leaders of the Women's March are allegedly associated with the leader of the Nation of Islam, minister Louis Farrakhan. Over the years, Farrakhan has been accused of making anti-semitic statements, which has cast a shadow over the official Women's March which claims to be fully inclusive of all race, religion, and gender.

Another thing that cities all over the country are doing are giving their march a theme. For Phoenix, that theme is "Rising Together," which they officially announced just before the New Year on Facebook. In the group's official statement, they revealed that the theme was inspired by the midterm elections.

"This election season, we saw a number of victories for Arizonans, at both the state and the local level, but there is more work to do," the statement, which was posted on Dec. 22, 2018, reads. "Arizona saw victories in education, more diverse representation, shattered expectations in voter turnout, and the number of women running for office soared. Now that the midterms are over, our focus is on making sure that our voices are heard in the new legislative session."

The group also shared that being as inclusive as possible, as Burch mentioned in her interview, is a huge priority for the 2019 Phoenix Women's March. The event was able to take place thanks to it's sponsors, which included Planned Parenthood, Ability 360, and Love Glasses Revolution, just to name a few.

The Women's March will take place on Saturday, Jan. 19, in multiple cities across the nation. Check WomensMarch.com for more information.