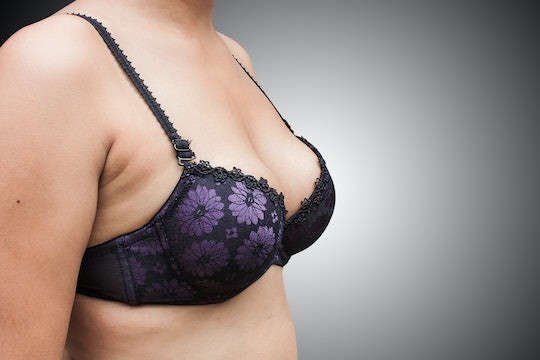 An Expert Explains How Your Breasts Actually Produce Milk

Whether a mom chooses to breastfeed or not, her breasts will generally start preparing for milk production throughout pregnancy. But does your body start preparing even before you see that plus sign? This can raise questions surrounding how and when breast milk is present. "Is there already milk in my boobs before pregnancy?" is one that often comes to mind. When you consider the breast tenderness or swelling that can accompany periods and hormonal changes, it's not far-fetched to think that breast milk may play a hand.

Although a woman's body releases an egg and prepares the lining of the womb for a potential pregnancy during the menstrual cycle, it doesn't actually start preparing breast milk before pregnancy. So you can take comfort in knowing the swelling or tenderness isn't due to breast milk. In an interview with Romper, IBCLC and owner of Peaceful Beginnings Lactation & Postpartum Services Alyse Lange says, "the body starts producing colostrum about halfway through pregnancy, which is present until milk production is initiated." The delivery of the placenta triggers a drop in progesterone and causes your body to begin "copious milk production after delivery," according to Lange.

As a general rule of thumb, however, breast milk is not present in your breasts before pregnancy. Aside from colostrum, breast milk isn't really even there until after pregnancy. Although there are rare occasions where your breasts may produce milk outside of a pregnancy (or your newborn), it's fairly uncommon and not really tied to your body prepping for a pregnancy. If you do notice a breast milk type substance and know that you're not pregnant, it's always a good idea to reach out to your caretaker to pinpoint why prolactin is on the rise.