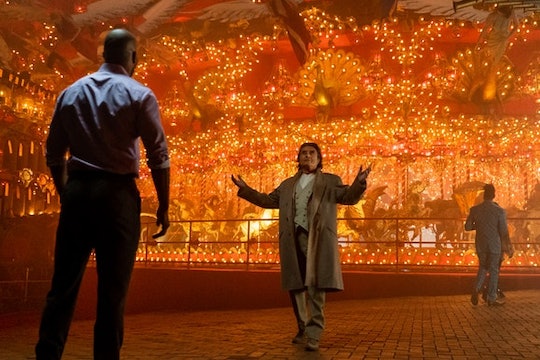 Fans of the American Gods book and adapted TV show know author, Neil Gaiman, is the man. It doesn't matter if you've read one or all of his books, he's found a way to connect to audiences young and young at heart through his fantastical worlds and beautiful prose. Now fans who have grown to love the American Gods show, on which Gaiman serves as executive producer, many want to know if there's a sequel to American Gods book or if it's on the way.

Lucky for you, there is another American Gods book in Gaiman's mind, but not on the bookshelves just yet. Actually, it'll be a while until it hits shelves. See how I gave it to you gently? The '01 bestselling book won a Hugo award for best science fiction or fantasy novel of the year. Then, in '06, Gaiman released a follow-up of sorts that featured a character from American Gods — Anansi Boys — but it wasn't tied to the original book. "I’ve been [planning] to do a second American Gods book since the first American Gods book," he said. "What I basically have right now is a boxful of stuff. Things go into it. I always knew there was going to be more story." Luckily, there is still plenty of story to get through on the show.

The show is about Shadow Moon (Ricky Whittle), who is just released from prison when he's introduced to Mr. Wednesday (played by Ian McShane), a god who employs Shadow as a bodyguard. In comes the worlds of New Gods and Old Gods who are at war with one another for power. In an interview with Screen Rant at New York Comic Con 2018, Gaiman said, "There are hooks built into American Gods that the sequel clips onto. And some of them are big and obvious, and some of them are almost invisible, and only I know how they work." If you're a fan of the series, you know it's barely gotten towards the midway point of the first book. Gaimain added that the second book would pick up where Season 5 of the show would leave off. So, there's some time.

If there is to be a sequel, what would be about exactly? Back in 2011, Gaiman not-so-subtly hinted in an interview with MTV that a second American Gods book would probably focus on new gods, adding, "The first book was very much about the grifters and the lowlifes, and you don’t really get to see much of the new gods and you don’t really get a sense of those gods who are doing incredibly well in America. In the second book, I definitely want to go into both of those things."

Gaiman is something of a god himself in the world of sci-fi and fantasy and he definitely keeps busy — he's also a script writer for Season 2 of American Gods, a showrunner for Good Omens (a show also based on one of his books), as well as more writing in general. "The big problem I have is having a maximum of one body and one set of typing fingers at any time,” Gaiman told Entertainment Weekly in 2017.

So while that's probably not the answer you're looking for — that it'll take some time — he clarified further in the Screen Rant interview. "If we make it through 5 seasons and we get to finish the book, and then we’ve done the stories of Shadow in the UK, I can get to roll up my sleeves and do the story of Shadow’s return to the US. But that’s a long way down the line."

In the meantime, you can get hyped over Season 2 of American Gods, read any of his other amazing work, and/or check out two short stories, The Monarch of the Glen, which appears in his collection Fragile Things, and Black Dog from Trigger Warning to keep you satiated. Kind of.