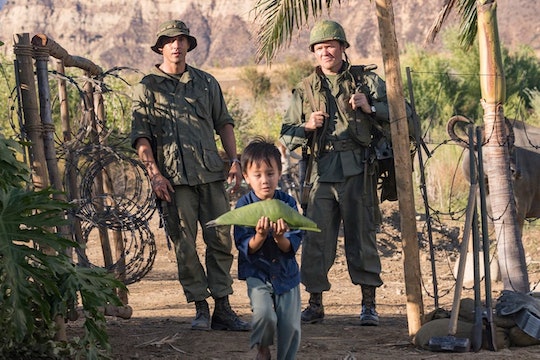 'This Is Us' Fans Think There's Another Pearson Out There

Tuesday night's episode of This Is Us, titled "Sometimes," was the epitome of quietly acted perfection. I'm totally, completely, and unapologetically biased — but even new viewers could appreciate the road trips with Jack and Rebecca in the past mirroring that of Kevin and Zoe in the present. Still, with more flashbacks of Jack's time in Vietnam, and more questions introduced, I can't ignore the enormous elephant in the room. Is there another Pearson kid? This Is Us fans think there might be.

Before you can fully appreciate any theories about another potential Pearson, rewind back to the reason: the mysterious woman wearing Jack's necklace in Vietnam. While Kevin's interest in learning more of Jack's past originally surfaced in the Season 2 finale (with he and Zoe on a plane to Vietnam in a flash-forward), it wasn't until he was handed a box of letters and photos from Jack's old comrade, Robinson (Charles Robinson) did he question the origin story of the necklace and his father's secret past. The old photo of Jack and a mysterious woman (Porter Duong) wearing Jack's necklace (the one he gifted to Kevin) opened a whole other conversation. She appears again during Season 3's hour-long look at Jack's time in Vietnam, with a little boy who offers Jack a fish — which she promptly scolds him for doing. You know Jack's time in Vietnam had profound effects on the Pearson family, but did this include Jack or Nicky fathering another child?

Showrunner and executive producer, Elizabeth Berger, previously told Entertainment Weekly it's clear this woman is part of Jack's story in Vietnam. "I think it’s a really complex story," she said. "Any relationship between an American soldier and a Vietnamese woman at that time is going to be so complex, and bring with it so much loaded history, that it is safe to say that it is not going to be the most typical relationship." When pressed on whether or not there could be another Pearson out there, she played coy saying, "Our mystery woman and what transpired between her and Jack in Vietnam is currently wide open for interpretation. I can say that in the course of the season we will learn exactly what happened between Jack and Nicky in Vietnam, and also learn more about this woman. As for whether there could be another Pearson out there? You’ll have to wait and see."

Ugh. So that doesn't answer anything. That's OK. Fans have their own ideas (like me). In no universe, fictional or otherwise, would Jack Pearson have a child with anyone other than Rebecca, let alone leave one behind. One theory is that he fathered and lost a child but I still don't buy it. Jack went to Vietnam to find his little brother, Nicky and keep him safe. But Nicky was Article 15'd, meaning he was "charged with reckless endangerment to himself and fellow soldiers." It's still unclear what put Nicky in a chaotic, uneasy state when he and Jack reunite for the first time, so there's obviously some holes left to fill.

The "Sometimes" episode highlighted Jack's plea for Nicky to move to his unit, and it was granted and Jack has exactly two weeks to save his brother from the effects of war, or at least, keep him safe. Some think Nicky doesn't die at all. Others believe he died in some sense and Jack couldn't save him. However, if you connect all of this with that group photo of the soldiers Kevin has, with the timeline (yes, this is what I do), note that Jack stays in Vietnam a whole year after this reunion (returning in 1972). That may not mean much to the casual viewer, but to me, it implies there's so much to know about Jack's time — and possible love life — in Vietnam. But if I stick to the idea there's only one "Bec," who's to say that mysterious woman wasn't someone he came to trust, a confidant, or even the mother of Nicky's child? Others have had the same thought.

So maybe there's no definitive answer on whether there could be another Pearson child roaming around the This Is Us world (yet), but if anyone fathered a secret child, my money's on Nicky Pearson. Or — and mark my words — keep your eye on this whole election thing with Randall. Something tells me his campaign opponent, Sol Brown (Rob Morgan) might have a secret or two. Who's to say William didn't father another child? Fans will just have to wait and see.