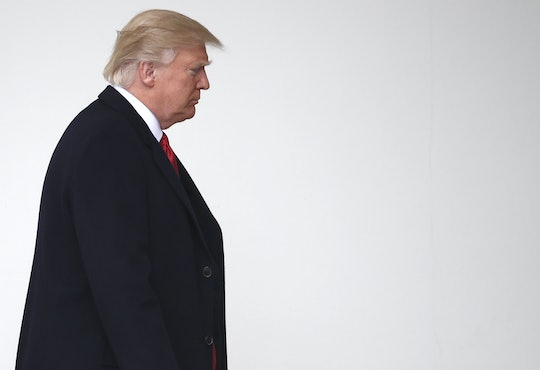 Is There Evidence Of Trump’s Wiretap Claim?

A little less than two weeks ago, Trump claimed in a series of tweets that President Obama had wiretapped Trump Tower in Manhattan. It was the first time a sitting president had ever accused another U.S. president of active espionage, and let's face it — that's a pretty huge claim to make without having at least some proof. Is there evidence of Trump's wiretap claim? That's exactly what the House Intelligence Committee demanded, giving the Department of Justice a Monday deadline to pony up the proof. But when the deadline came, the DOJ asked for more time.

That same day, White House Press Secretary Sean Spicer said that Trump's tweets were about general surveillance — despite Trump naming both the act of wiretapping and President Obama specifically in his Twitter tirade. Then on Tuesday, Spicer went so far as to say that Trump was "extremely confident" the DOJ would produce evidence of wiretapping at Trump Tower to the House Intel Committee. Not even 24 hours later, leaders from the House Intel Committee just dealt Trump's "alternative fact" about wiretapping a pretty hefty blow.

About that wiretapping evidence? "We don't have any," House Intelligence Committee Chairman Devin Nunes told reporters at a press conference Wednesday afternoon in Washington, D.C.

Just so we're all on the same page: Nunes is a House Republican representing California's 22nd district. This isn't some kind of political resistance spin — this is coming from a member of Trump's own party. Nunes made it clear, in no uncertain terms, that the House Intelligence Committee has found zero proof that Obama wiretapped Trump Tower, according to U.S. News & World Report:

We don't have any evidence that [wiretapping] took place. I don't believe, just in the last week of time based on the people we've talked to, I don't believe there was an actual tap of Trump Tower.

So, while the DOJ has come up with a big ol' pile of nothing, what about the Federal Bureau of Investigation? FBI director James Comey is expected to address Trump's wiretapping claims, and what evidence the FBI may — or most likely doesn't have — when he gives testimony on Monday at a public congressional intelligence hearing about investigations into Russian interference with the election.

And let's not forget: If the FBI did have evidence, they probably can't comment about it publicly anyway because of an ongoing investigation. And if the Obama Administration did actually wiretap Trump, then they'd need probable cause... which means Trump was up to no good. There's really no way pushing this ridiculous narrative works for the White House — and yet here we are.

Meanwhile, President Donald Trump spent Wednesday morning bleating about the "fake news" surrounding his leaked 2005 tax returns on Tuesday night's The Rachel Maddow Show in an attempt to deflect from the much bigger story of the day — that our leader has lied to the American people again.

Just so we're all clear, here is exactly what Trump said in his wiretapping tweets from March 4:

A few notes: First, someone please tell Trump it's "wiretapping," all one word. Also, "tap" has just one P, not two. Third, someone get Trump a dictionary and let him know that his first tweet is actually an act of McCarthyism — because the definition of McCarthyism is to make accusations that are not supported by proof or to make unfair allegations, particularly about communism.

But really, the most important thing that America should be telling Trump at this point: For the love of god and all that is holy — just. Stop. Lying.

Trump is spending Wednesday at rallies in Michigan and Tennessee — because of course a man so confident in his presidential legitimacy needs to keep holding campaign-style rallies across the country — so there's not yet been a response from Trump about the abundant lack of evidence for his claims. It'll be interesting to see if Trump will throw Nunes under the bus, or praises his "hard working representatives" that the media should "be nice" to — for their work in completely eviscerating his potentially libelous claims about Obama and the wiretaps of which no one can seem to find any evidence.

But don't get your hopes up yet that the House Intel Committee's findings are some kind of "Et tu, Brute" Ides of March moment for Trump. Remember, this wiretapping nonsense is all just smoke and mirrors to take away from Trump's bigger problem — the giant Russian elephant in the room. But thankfully, Monday's congressional intelligence hearing on Russia will finally start to shine an uncomfortably bright spotlight on Trump's possible Russian ties — and hopefully one that the White House won't be able to avoid. (Trump's representatives haven't responded to Romper's requests for comment regarding Trump's alleged ties to Russia.)