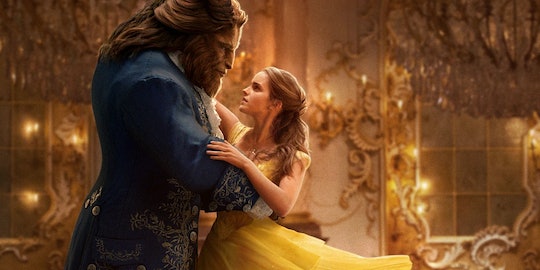 Is There Singing In 'Beauty And The Beast' Live Action? It Is Part Of The Fairytale

Do you remember slow-dancing around your room while holding on to your pretend prince's shoulders in your invisible yellow gown? I know I do. The five-year-old me and my imaginary man waltzed around to "Tale As Old As Time", just like Belle in the grand ballroom. Now that I'm a full-grown woman, I'm no longer dancing around with pretend dudes. Yet, I do still catch myself humming the familiar Disney tunes, and wildly anticipating Beauty and the Beast's live-action arrival in March. After watching the brand-new trailer for Beauty and the Beast, I can't help but notice that there's no lyrics to be heard, leading me to wonder, will there be singing in Beauty And The Beast live action?

In short, of course there will be! We're talking Disney here, after all. According to Collider, "Beauty and the Beast stands unique from Disney’s other recent live-action adaptations by maintaining the musical format." In an interview with the website, Luke Evans (Gaston) disclosed that even though the songs were all pre-recorded, "they also performed them live on set to offer more options in the editing room."

Evans is a singer, and "loved ever minute of" using his pipes live on stage. "I’ve always been used to singing live on stage, doing eight shows a week for a year or more" he gushed, "we’re proper theater lovers, me and Josh [Gad]."

We pre-recorded every[thing], but some of us sang live on set as well, during the takes. We were mic’d and they recorded that and I think afterwords, in sound, they’ll be able to chose whether the live version is better than the pre-recorded version. We’ll never know!

When it came to musical notes, Evans was a seasoned singer, while Emma Watson (Belle) was a vocal virgin. She called singing "terrifying." And according to Cinema Blend, she posted on social media that she would take some singing lessons for her new role. Those lessons must have paid off because in an interview with MTV News, Evans praised her when saying she has a "great singing voice to boot." I can't wait to hear "that funny girl's" rendition of "Something There."

Evans also teased audiences with details about the two new songs from Alan Menken and Tim Rice. He "admire[ed] how they complement the original soundtrack while bringing something 'incredibly unique and different.'"

We have even more to look forward to than originally thought! It's clear that not only our eyes will be Disney's guest on March 17, but our ears will be, too.