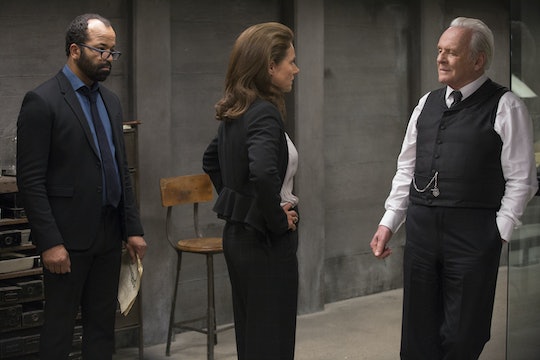 Is Theresa Dead On 'Westworld'? Ford Took Her Out Of The Picture

Last Sunday, Westworld proved that it's always best to assume everyone's a host until they're proven to be human — a lesson that I'm afraid Theresa learned the hard way. Many fans theorized that Bernard, Ford's right man and an all around good guy, was a host, but most were still devastated to discover they were right. More shocking than that reveal was Ford's command for Bernard to kill his former lover, who now knew far too much. And while viewers saw Bernard presumably follow his latest order, is Theresa really dead on Westworld? Based on the preview for Sunday night's episode, it's clear that Bernard is none too thrilled with what Ford just made him do, implying that she was no longer in the land of the living. And it seems this latest event could very well end up putting a permanent strain on Bernard's longstanding relationship with Ford.

Throughout most of the season, Bernard and Theresa were sleeping together until she decided to put an end to their affair for the sake of their professional relationship. Whether or not these two were ever in love, they were definitely very close and despite their break up, it was obvious the two still cared for each other. At the start of the latest episode, Charlotte Hale, the board executive, told Theresa that there would need to be a "blood sacrifice" to remind Ford who's really in charge. They then put together a demonstration to illustrate how dangerous the hosts were, giving them more than a good reason to fire Bernard.

Despite their falling out and Theresa's betrayal, Bernard still felt loyal to her and said that he knew she was sneaking data out of the park. He also decided to show her Ford's secret hideout. Once inside, Theresa noticed a door along the wall where they discovered Ford's secret lab, filled with designs of Ford's "special" hosts. It was then that Ford showed himself and revealed to both Bernard and Theresa the thing many people already predicted was coming: the fact that Bernard is a host. Nevertheless, it was a heart-wrenching that soon became Theresa's death sentence.

Now privy to his secrets, it became clear Ford wasn't going to let Theresa leave alive. He reiterated Charlotte's earlier words about a "blood sacrifice" and left Bernard to kill Theresa, smashing her head against the wall, making some question if Bernard led her to Ford's hideout for this specific purpose. As much as fans may want to believe Bernard somehow escaped Ford's control and only made it seem like Theresa is dead, let me assure you that she is, in fact, very much deceased. In an interview with The Hollywood Reporter, Sidse Babett Knudsen, who plays Theresa, said she always knew Theresa was going to die and how many episodes she was going to be in.

So sorry Theresa and Bernard 'shippers, but that ship has officially sailed. And now that fans know hosts can definitely kill humans, it kinda makes you wonder who will be next?