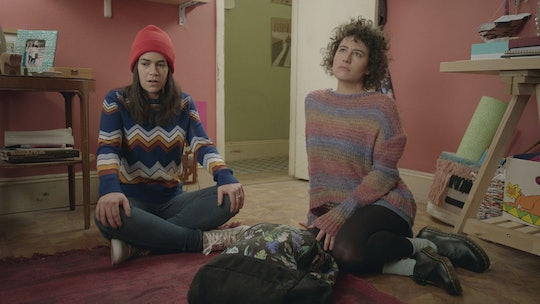 After taking a yearlong break following its fourth season, Broad City returns to Comedy Central on Jan. 24 with 10 all-new episodes. But while it's exciting to have the show back, it's also bittersweet. That's because this is the last season of Broad City; the show will conclude with its fifth and final season.

Though many shows throughout television history have been abruptly cancelled while they were still very much beloved by their fans, that's not the case here. It was the decision of series creators Abbi Jacobson and Ilana Glazer to end the show now. Comedy Central president Kent Alterman told IndieWire that Jacobson and Glazer approached the network and said that they felt it was "time to resolve the series." It was totally up to them to decide how to do that, and both women wanted to "go out in style." Without spoiling any of the upcoming episodes, he praised the ideas they had for Season 5 and had nothing but good things to say about the partnership.

The fact that Jacobson and Glazer made the choice to end the show on their terms means they had plenty of time to figure out exactly how they wanted it to end. Because of that, it won't be an abrupt goodbye but a loving farewell to the series.

In a joint statement reprinted by The Hollywood Reporter, Jacobson and Glazer discussed just how much Broad City meant to them. They said:

Broad City has been our baby and first love for almost 10 years, since we started as a web series. It's been a phenomenal experience, and we've put ourselves into it completely. Broad City's always had a spontaneous pace and feeling, and ending after season five honors that spirit. We are very excited to bring new voices and points of view to Comedy Central and continue our collaboration together in new ways.

The final line of their statement refers to a deal Glazer and Jacobson struck with Comedy Central and its parent comedy Viacom. The first-look deal allows both women (individually and as a team) to create and produce shows for Comedy Central, or any of Viacom's other networks (like MTV or the Paramount Network). They already have three in the works: Mall Town USA, Platinum Status, and Young Professionals.

According to THR, Jacobson and Glazer won't be starring in any of those shows, but they will be producing all three. When Alterman spoke to the publication, he wasn't opposed to another project that featured Jacobson and Glazer stepping back in front of the camera. However, he made it clear that there hadn't been any discussions about that happening and stressed that it would have to "come organically" if it did. It doesn't seem like the door is closed on another Jacobson-and-Glazer-starring production, but it likely won't be anytime soon.

But all of that is still far in the future. Right now, fans still have 10 episodes of Broad City to look forward to before Abbi and Ilana's madcap journey finally comes to an end.