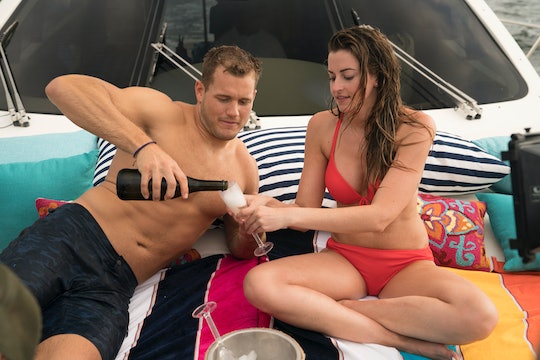 If you're a fan of The Bachelor, you already know about Colton's journey to become the Season 23 lead. From the first time he met former Bachelorette, Becca, to the devastating heartbreak when he was sent packing after hometowns, there have been a lot of ups and downs. This is especially true of Colton's relationship with former Bachelor contestant, Tia. With all the drama, is Tia Booth watching Colton on The Bachelor?

Whether you want to read more into it or not, Tia —and even Becca — have sent their support ahead of The Bachelor season premiere. In Tia's Instagram throwback picture (below), she said, "Hey @coltonunderwood remember that time you wore a sleeveless sweatshirt at the beach and we realized we were 0% compatible and solely meant to be supportive friends? Well here’s my support. Now keep your damn shirt on and go find you a gal."

Sounds pretty friendly, right? Considering the way things went down between Colton and Tia, I'd say this is pretty adult of her. In case you don't remember, Tia revealed to Bachelorette, Becca (both were contestants on Arie's season where Becca won, but was suddenly broken up with on national TV), that she and contestant Colton had a weekend fling, or something. The news shocked Becca — and fans — and though Becca was assured it wasn't an issue for Tia, I think deep down she knew something was off. And actually, that proved to be true when both Tia and Colton appeared on the subsequent summer delight, Bachelor in Paradise. Though Colton was reluctant to jump into another thing with Tia, the pair ultimately decided to give it a go. All seemed well until — you know what I'm about to say — Colton ended the relationship on TV, just before the announcement of who the new Bachelor would be. I don't want to stir the pot, but come on. The timing is suspect.

Immediately after they parted from the tropical island, Tia told Glamour the breakup was probably a good thing — at least for him. "I think Colton needs to find himself before he can let someone in who's going to make him happy in a relationship," she said. "That's what I've told him: that he needs to focus on himself and not try to have this perfect exterior." She added that the breakup was very hard on her because she didn't see it coming." Honestly, those are the worst situations to be in, so it's really big of Tia to still send her support via social media.

It's clear both have grown in their time since Paradise so maybe a true friendship is possible. And anyway, Tia's in a relationship with Cory Cooper, Executive Vice President at his family’s steel company, Cooper Steel. If you peep either one of their Instagram accounts, you'll see how invested they are in this new relationship. Colton is a thing of the past and Tia seems to be on board with sending all the [friendly] love and support possible. #breakupgoals