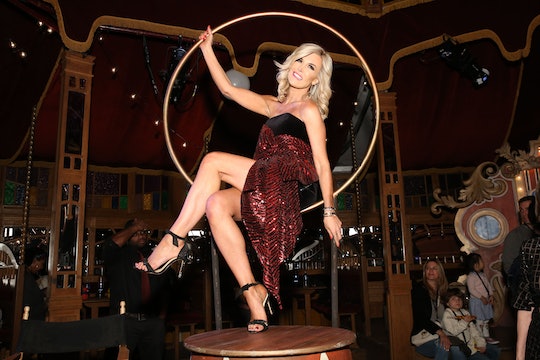 Tinsley Mortimer's relationship with Scott Kluth has played out almost entirely onscreen on The Real Housewives of New York. They were introduced on the show thanks to former cast mate Carole Radziwell, who arranged their first date. Scott and Tinsley sparked immediately, though their relationship ended up being on and off because he lived in Chicago while she was in NYC. Their current status isn't entirely clear on the show, leaving some wondering if Tinsley Mortimer is single now.

It looks like Tinsley and Scott did break up at some point during filming for Season 11, so she may be single now. But the situation is complicated. Tinsley and Scott were still somewhat involved at the start of the season because Tinsley took custody of his car, but they'd been having trouble making their relationship work prior to that. At the Season 10 reunion, Tinsley said that the distance was a problem, but Scott was also so focused on his work that he felt like he couldn't balance his career with dating Tinsley.

Us Weekly announced their split in June 2018, and Tinsley confirmed it when she appeared on Watch What Happens Live with Andy Cohen. "We're broken up right now," she said, though she added, "But I'll tell you this. We break up all the time."

It didn't sound like things were entirely over at that point, as Tinsley later told People that she was still very close with Scott and even worked at his company, CouponCabin, as an account manager. She said it was good to take a break occasionally, as it gave them a little perspective, as well as the opportunity to miss one another. While the distance remained a roadblock, Tinsley acknowledged that it wasn't insurmountable; Scott was in Chicago, after all, not Europe. She also sounded willing to see where the future took them. "But you know, you're just going to have to wait and see!" Tinsley told People. "Sometimes the heart gets what it wants, and sometimes it doesn't."

That was in June of last year, but it doesn't look like Tinsley and Scott have mended things since. There have been rumors that Tinsley is dating, but no confirmation directly from the woman herself. Us Weekly reported that an anonymous source said there were no serious dating prospects on the horizon; Page Six speculated that Tinsley had been spotted flirting with a male model at a gala in Miami. However, Tinsley hasn't spoken about anyone specific in interviews or on her social media accounts.

At the moment, it doesn't seem like Tinsley is currently seeing Scott — or anyone else, for that matter. If she is involved with someone new, then she's keeping that information private. Considering Tinsley is a single woman living in a major city, it wouldn't exactly be a shocker if she was casually dating or flirting with people who crossed her path. But until she decides to share the news herself, it's all just conjecture. And in the meantime, RHONY fans can see how exactly things unfolded between her and Scott every Wednesday on Bravo.