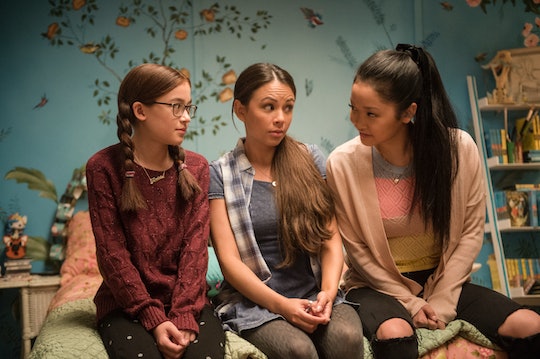 'To All The Boys I've Loved Before' Has Real Life Inspiration

In To All The Boys I've Loved Before, Lara Jean Song Covey gets saddled with a serious dilemma. She had developed a tradition of writing long love letters to her most intense crushes, but never sending them. Then one day, without her knowledge, the letters are sent out. It sounds like the perfect plot for a romcom, but is To All The Boys I've Loved Before based on a true story?

Surprisingly, some of the details are rooted in reality, though the characters and storylines are fictional. There's no Lara Jean in real life with two charming sisters, and no handful of suitors lining up after getting one of her letters. But despite the fact that the Netlflix movie — and the novel of the same name that it was adapted from — are fictional stories, the initial inspiration came from a real place.

Jenny Han wrote the book upon which the movie is based, as well as its two sequels, P.S. I Still Love You and Always and Forever, Lara Jean. Ahead of the movie's premiere on August 17, Han posted the email she sent to friend and fellow author Siobhan Vivian that contained the earliest idea for the book. And in that email, she revealed what inspired her to write it.

Han told Vivian that she'd had the idea for an adorable title, To All The Boys I've Loved Before, but needed to find a storyline to match it. She thought she might be able to use something from her own high school experience. "Ever since high school, I've done this thing for closure, when I'm trying to say good bye and close the door on a person," she wrote, continuing:

I write a long letter and say all the stuff I would never say in person, then I seal it up and put it in my hat box and never send it. Is there something there? Maybe she writes these letters and they accidentally get sent.

That seed of an idea ended up being the basis for the entire book. Lara Jean does everything Han did as a teenager, right down to placing her finished letters into a picturesque hat box. Han even posted a picture of her personal hat box. But unlike Lara Jean, Han's letters were never sent out. That's the action that really pushes the story forward, and it's also where real life ends and fiction begins.

Other aspects of the novel are lifted from Han's life as well, according to an interview she did with Publisher's Weekly. Though she doesn't have two sisters like Lara Jean, she does have one with whom she's very close. Plus Han is from Virginia just like Lara Jean; that's where the entire book series is set. She definitely seems to have drawn from her life when it came to building Lara Jean's world, but then she elaborated on those real events. Much of To All The Boys is invented, like the scheme Lara Jean concocts to pretend-date one of her crushes so that she can assuage the suspicions of another.

Mixing fact and fiction can be par for the course for many writers. A lot of authors infuse parts of their lives into their stories without intending to write a memoir or a roman à clef. When Han utilizes her own experiences, it gives the story a personal flair and adds some interesting context to all those romcom shenanigans. It makes even a teen movie about secret love letters and zany mishaps feel a little bit more grounded. It might not be a true story, but it grew out of someone's real life.