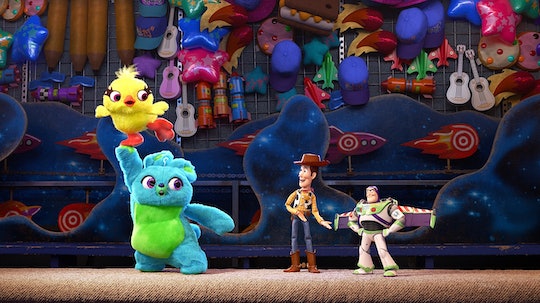 Taking Your Little One To See 'Toy Story 4'? Here's What Parents Need To Know

Things are really heating up for Disney fans. The new Star Wars Galaxy's Edge just opened at Disneyland and now the fourth, and presumably final, installment of Toy Story is just days away from release. That's right, Woody, Buzz, Potato Head, Rex, and the whole gang are back for another epic adventure. But, before you head out to the theater with your kiddos in tow, parents may be wondering whether Toy Story 4 is appropriate for kids under 5 and if there's anything in the film that might not be totally suitable for toddlers.

Toy Story 4 centers around Bonnie and her new found love for Forky, a school craft project that she deems special enough to be a toy, according to IMDb. But Forky believes he's nothing more than a piece of trash. Woody, however, being the optimist that he is, helps Forky understand just how important it is to be a child's object of affection. But then, Forky gets lost and that's when the new adventure begins.

While there's nothing necessarily risqué regarding the plot of Toy Story 4 — considering it's rated G for general audience — there are a few instances of mild violence and parts that many seem "scary" to younger audience members, according to Digital Spy. And, parents, if you're one to tear up at the slightest bit of Disney nostalgia, be prepared. There are some very sentimental scenes towards the end of the movie, according to Good Housekeeping. Luckily, though, those emotional moments should go right over little ones' heads.

But, most importantly, there are a few questions that parents should ask themselves before bringing anyone under 5 to a movie. According to Common Sense Media, if your child is sensitive to loud sounds or scared of the dark, you may want to wait until they're older to head to the theater. And you may also want to consider whether they can sit still for the entirety of the movie. For reference, according to Rotten Tomatoes, the fourth Toy Story movie runs 1 hour and 40 minutes, which is on the longer side, so you may just want to double up on the snacks?

As Elizabeth Pantley, author of The No-Cry Discipline Solution, once explained to The Bump, "Most toddlers don’t have the desire or patience to sit in one chair throughout a full-length movie. So first ask yourself why you want to take him." If your intention is to watch the whole movie, go in knowing that you might miss some of it when you take your child to bathroom breaks or inevitably chase them around to get them back to their seats.

Toy Story 4 hits theaters nationwide on June 21, and pre-sale tickets are available now on Fandango and at your local movie theater box office.

TLDR: Can you take your 5-year-old to see Toy Story 4? The answer is probably "yes," just know what there is some mild violence and it's not the shortest flick. After all, mixing a preschooler with popcorn, candy, and a dark room could make for a sticky situation if your little one isn't quite ready for a trip to the movies.

More Like This
Why ‘Lightyear’ Is Banned In Several Countries — And Why You Should 100% Still See It
Where Are The Toys Of Toy Story Today?
'Hocus Pocus 2' Officially Has A Release Date To Look Forward To
10 Of The Raddest Movies From The '90s To Watch On Girls Night