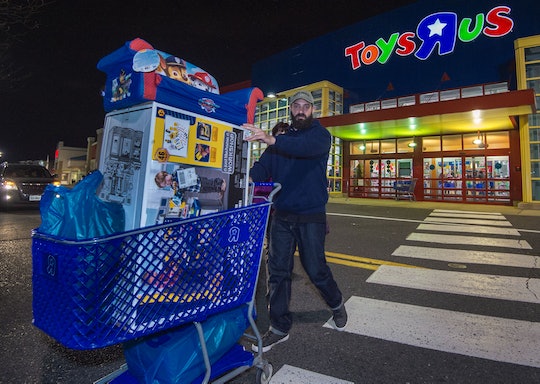 Toys "R" Us Is Reportedly Filing For Bankruptcy. This Is Not A Drill.

Whether you were counting on buying your kid's Halloween costume there next month or were already planning out holiday gifts for the coming winter, you might have to rethink your game plan if Toys "R" Us is your go-to toy store. Recent reports have the question swirling: Is Toys "R" Us going out of business? Rumors of irreconcilable debt appear to indicate that bankruptcy could be on the horizon for the retailer.

Update: According to a press release published on Monday evening, Toys "R" Us has "voluntarily filed for relief under Chapter 11." Dave Brandon, Chairman and Chief Executive Officer for the company, said in a statement:

Together with our investors, our objective is to work with our debtholders and other creditors to restructure the $5 billion of long-term debt on our balance sheet, which will provide us with greater financial flexibility to invest in our business, continue to improve the customer experience in our physical stores and online, and strengthen our competitive position in an increasingly challenging and rapidly changing retail marketplace worldwide.

The release added that "as the holiday season ramps up," the company's "physical and web stores are open for business."

Earlier: It all started with the The Wall Street Journal reporting that the store's suppliers have "tightened terms" with the retailer, according to the publication, citing sources close to the situation. Because of these new pressures indicating a distrust in the store's ability to maintain sustainable financial ties, many speculate that Toys "R" Us could even file for bankruptcy as soon as this week. A few other signs, including a drop in Hasbro and Mattel shares (of Play-Doh and Barbie fame, respectively) seem to have sealed Toys "R" Us' imminent fate, according to Reuters. That, plus the bankruptcy filing rumors, likely mean that you'll have to go elsewhere to get new doll house furniture and Nerf gun pellets.

But odds are, you already do shop elsewhere for your kids' — and your own — toys, and that might be part of the problem. The not-so-recent online shopping revolution has definitely taken its toll on the brick-and-mortar retailer and its many outlets. Toys "R" Us' not-so-optimal website, according to TIME, likely contributed to its downfall. "Its website was not as easy-to-use as competitors like Amazon or Walmart," TIME explained, "and even after it revamped its online presence this year, the site does not look as clean as more digitally savvy options."

This, combined with some hefty debt its been saddled with for over a decade, might mean the end of Geoffrey the Giraffe. As it appears right now, Toys "R" Us may be stuck in the past, and unless its able to get up to speed, it might be left there.

But despite all of this bad news, CNBC reported that Toys "R" Us might be working to restructure its debt, with some solid legal help to hopefully find a solution. At best, this would result in some downsizing on the company's behalf, so that it might be able to stay afloat a while longer.

"If they didn’t have the debt," Jim Silver, an industry analyst and the editor of toy-review site TTPM.com told Bloomberg, Toys "R" Us "would be making $500 to $600 million a year in profit." With such a crippling load, odds seemed to be stacked against a turn-around, however.

If the refinancing doesn't work out, then what will happen if Toys "R" Us files for bankruptcy before the holidays? The company has 1,600 stores around the world, and consumers definitely depend on the locations for last-minute shopping. Sure, Amazon Prime can ship your package in a couple of days, but what about that last-minute Christmas present you kept meaning to pick up but for whatever reason put off until Dec. 23? Better hope Target and Walmart has the toy in stock — or just vow to plan a little better for next year.

On Twitter, users are lamenting the reported closing of Toys "R" Us — likening it to when Blockbuster shut down for good — is signaling the end of an era. In the same way that browsing through VHS tapes on a Friday night might be a thing of the past, perusing toy aisles on a Saturday afternoon might become a relic as well. And it's a bummer, because kids still love the tactile experience of picking out new things, seeing them on the shelf, and being able to compare options side-by-side. If things go as expected, well, at least you'll always have Target.