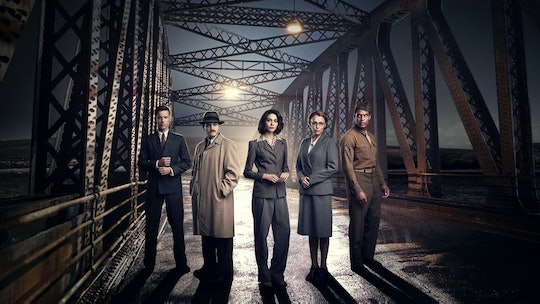 In the upcoming Netflix series Traitors, Feef Symonds finds herself embroiled in a scheme to spy for the United States in her native United Kingdom at the end of the second world war. Her loyalties are tested as she tries to keep her head above water and satisfy her ambitions without getting caught. It's a complicated, compelling story — but is Traitors based on a true story?

The trailer has enough gravitas and drama to give it the weight of truth, but it doesn't look like there was ever a Feef Symonds spying on the English government. Coming to Netflix on Mar. 29 in partnership with Channel 4, Traitors is the work of Bash Doran, who previously wrote for Masters of Sex and Boardwalk Empire. It stars Emma Appleton as Feef, with Michael Stuhlbarg co-starring as American agent Rowe.

According to Deadline, the Americans start spying on the British in Traitors to make sure they don't become involved with Russia. Technically, it's difficult to know if that ever really happened — the nature of spywork is shrouded in mystery and subterfuge for a reason, after all. Feef and her friends are decidedly fictionalized, but Doran felt there was enough historical precedent for the tale.

As reported by Radio Times, Doran said at a BFI screening that she did "some fairly deep research into both the history of the CIA and I talked to a bunch of spies." She continued, "And what I have been assured is there is no reason to think that there wasn't" an American spy or two keeping an eye on the British government.

The show mixes historical fact with fictional speculation in more ways than one. It's grounded in post-WWII culture in 1945, which means that the atom bomb being dropped in Japan comes into play, the Labour party takes on a more prominent position in British government, and the Cold War is on the horizon. Traitors deals with the complicated history between the States, the U.K., and Russia, which means there will always be a seed of truth in the story — even if it gets stretched now and then.

Doran went on to say, as reported by Radio Times, "You definitely have to be faithful [to history], but the license to me comes in the curation of the events. It's not a documentary, but as you curate all of history for that period, you inevitably create a very specific analysis."

There may not have been a real Feef Symonds or Rowe; the idea of American spies in the British government could just be a wild theory with really good production values. But as Doran told Channel 4 in a statement sent to Bustle UK, history was a jumping off point that allowed her to improvise something new with the characters. It gave her the opportunity to get creative with her themes and settings.

There's enough actual history involved to make exploring the possibilities all the more intriguing, but at the end of the day Traitors is very much its own original story.