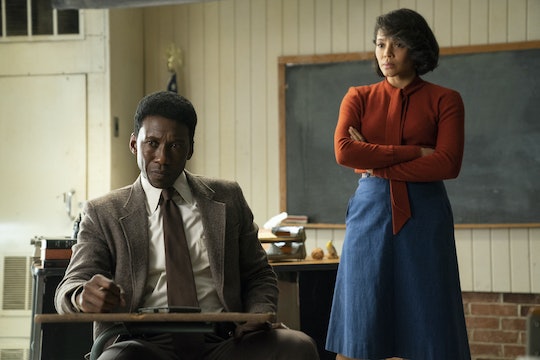 Here's Which 'True Detective' Season Is Based On True Events

It's no secret that some of the best crime dramas are based on real life events. Whether it's about abducted children, serial killers on the loose, grifter husbands with nefarious motivations, plenty of popular shows on TV draw on true events. With the new season of True Detective Season 3 premierin you might want to know if True Detective Season 3 is based on a real case.

While Season 2 and 3 aren't said to be based on any one real case, Season 1 was absolutely inspired by true events. According to Jezebel, there was a satanic sex abuse case in the early 2000s that had eerily similar details to True Detective. The (fictional) show followed detectives Rust Cohle and Marty Hart, played by Matthew McConaughey and Woody Harrelson respectively, as they spent 17 years chasing answers on a bizarre case in the Louisiana swampland. In an interview with Entertainment Weekly series creator Nic Pizzolatto confessed he'd been inspired by true events for the first season, saying, "A lot of things are left in fragments for the viewer to piece together about how we arrived at where we arrive. You know, you can Google 'Satanism,' 'preschool' and 'Louisiana' and you'll be surprised at what you get. But instead of having our Satan worshippers worship Satan, they worship The Yellow King."

Pizzolatto hasn't mentioned whether Seasons 2 and 3 were similarly inspired, but you can make an educated guess. Season 2 was set in a fictional city of Vinci, based on the real California city of Vernon. And just like in the show, the death of city administration, Eric Fresch, stemmed from secret money made from an outside consulting contract with a city-owned operation. Coincidence? Unlikely. As far as Season 3 is concerned, the disappearance of two children may link to any number of cases, TBH. This season's crime drama stars Moonlight Oscar winner, Mahershala Ali, as one of two lead detectives in the Ozarks located in Northwest Arkansas. Like the others, this season will juggle multiple timelines, this time following Ali alone as he grapples with the case in three different periods of his life.

Season 3 of True Detective may or may not live up to the brilliance of Season 1, and may or may not be inspired by a real cases (or cases). If a creative work is good enough, you'll buy into the characters and story anyway. And honestly, with Ali playing lead, I'll buy into it regardless.