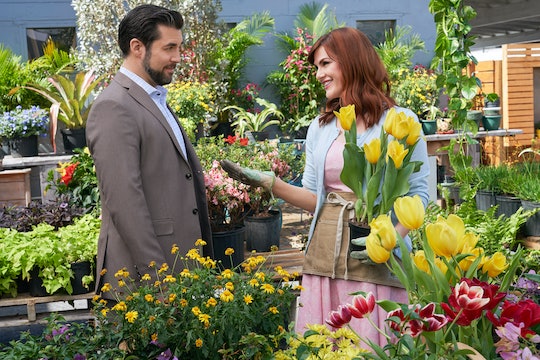 'True Love Blooms' Is Closer To Reality Than You Might Think

When you love spring, flowers, and cheesy Hallmark romcoms as much as I do, an original movie like True Love Blooms is like Christmas morning. So is it too much to also hope that True Love Blooms is based on a true story? I just want to believe in love, guys! Well it turns out that it is! Sort of. Let me explain a little bit what I mean.

First of all, True Love Blooms is about a woman, Vikki, who manages a beloved community garden. That is, she does until a handsome real estate developer comes in and threatens to replace her garden with a skyscraper filled with condos. She tries to teach him about the beauty of her garden in hopes of saving it. No word yet on if she's successful in this — you're going to have to watch to find out — but it looks like she is going to have some luck in capturing his heart (this is Hallmark, guys, what did you expect?). The story has a bit of a You've Got Mail vibe going for it with a distinctly spring-y twist which means I am all in for this. Like I said — I love romcoms.

Now here's where the true story part comes in. The movie's star and executive producer, Sarah Rue, actually came up with this story with the help of her friend Elias Madias. And the inspiration literally came from her own backyard. In an interview with Hallmark Channel's Home & Family she said:

I grew up in New York City and my parents were members of the community garden on 96 and Broadway and some of my fondest childhood memories were going to that garden and planting flowers. And I remember my dad taking my finger and we would pet sleeping bumble bees. I kid you not. And it was so wonderful and growing up in Manhattan there wasn’t a lot of nature. You know like if we saw a pigeon you were like, real excited, and so going to the community garden was a big deal. And then a developer came in, bought the garden, ripped it out and built a giant skyscraper. So I brought this idea to my best friend Elias who’s a romantic comedy writer and we went into Hallmark and we pitched it and sold it.

Speaking as a person who lives in New York City currently, I can concur with the fact that "nature" is a relative term around here and that condo buildings tend to sprout up pretty regularly. I don't know if I'd fall in love with the guy trying to build one on top of my garden though — which is of course what happens in True Love Blooms. So while the "romantic" part of the movie is pure fiction, the inspiration was all Rue.

Playing the real estate developer who threatens Rue's character's beloved garden is Jordan Bridges, perhaps most recognizable for his teen roles back in the day like Drive Me Crazy. From the movie previews alone it's clear these two have plenty of chemistry on screen. And look — I don't know how these two are going to get over their differences and find out that all they really need is love. I'm just excited to watch it happen.