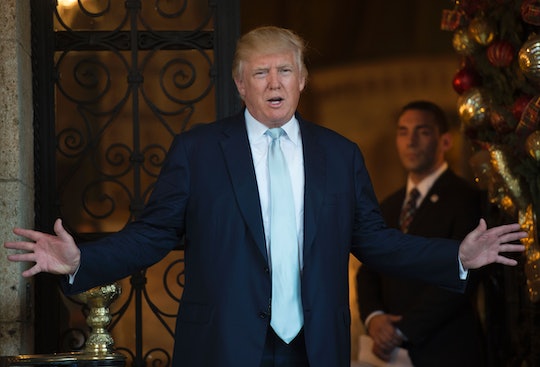 From foreign governments booking rooms in his Washington D.C. hotel to his children sitting in on calls and meetings with world leaders, the ways in which President-elect Donald Trump could violate the Constitution, not to mention the trust of the American people, during his presidency are already mounting, even before he takes the oath of office. Some are arguing he's already committed various impeachable offenses. Is Trump afraid of being impeached? He doesn't appear to be making any of the moves necessary to avoid the appearance of corruption or conflicts of interest.

The Trump transition team has not responded to Romper's requests for comment on potential conflict of interests of the President-elect, or possible impeachment proceedings.

According to the Washington Post, Trump's business dealings will put him in violation of the Constitution's Emoluments Clause the moment he takes the oath of office. The Emoluments Clause explicitly states, the Post pointed out, that presidents are forbidden from getting paid money or given gifts by a foreign governments. Trump is potentially in violation, both by foreign diplomats booking hotel rooms at his new D.C. property, and perhaps most egregious, his inclusion of daughter Ivanka Trump and adult sons Eric and Donald Jr., on meetings with world leaders, while she and the Trump organization could be in a position to benefit from favors and access to those leaders, according to reports. In just one instance, Ivanka Trump attended the meeting between the president-elect and Japanese Prime Minister Shinzo Abe while she was in the midst of negotiations for a licensing deal with Sanei International, which coincidentally counts the Japanese government as it's largest shareholder, according to the Washington Post. Trump transition team has not responded to requests for comment regarding this meeting.

The hotel presents an even bigger problem for Trump as its lease with the government states explicitly that it cannot be held by an elected official, according to Vanity Fair.

Even one of Trump's biggest boosters, Newt Gingrich, has said Trump's business entanglements are problematic for a President of the United States, according to NPR. "It’s a very real problem,” Gingrich told NPR. " I don’t think this is something minor. I think certainly in an age that people are convinced that government corruption is widespread both in the U.S. and around the world, you can’t just shrug and walk off from it.”

The U.S. Office of Government Ethics issued a letter saying Trump should, "divest himself of his vast business interest while in the White House," according to Fortune. Trump however, has only so far put his adult children in charge of his company to avoid the appearance of corruption.

Trump canceled a scheduled press conference for Dec. 15, which was supposed to explain his plans to divest himself from his business dealings, according to Talking Points Memo.

According to Fortune, OGE Director Walter Schaub, Jr. rejected that as an acceptable arrangement for a sitting president. "Transferring operational control of a company to one's children would not constitute the establishment of a qualified blind trust, nor would it eliminate conflicts of interest," Shaub wrote.

But none of that has affected Trump, who has continued to avoid addressing his plans in any public or substantive way that might satisfy the most basic questions about his conflicts of interest while in the White House. Take a look at this tweet from the PEOTUS dismissing that his business ties are particularly complicated or problematic.

Making matters even more murky is the fact that Trump still has not released his tax returns detailing what his business interests are, as Vanity Fair reported.

Perhaps Trump's confidence in his ability to do as he pleases is justified. In order for a president to be impeached, charges must be brought by the House of Representatives, according to Senate.gov. As Trump assumes office the Republicans hold a comfortable margin in Congress, making impeachment of a GOP president unlikely.