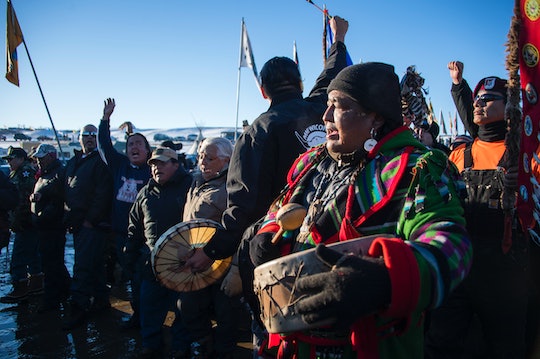 Trump Is Moving Forward With The Dakota Pipeline

Those protesting the construction of the Dakota Access pipeline have been worried for some time now that the Donald Trump administration would reverse President Barack Obama's order to block construction. On Monday, it looked like those worries were well-founded. The White House confirmed in a press conference with Press Secretary Sean Spicer that President Trump is moving forward with the Dakota Access Pipeline.

Areas like Dakota, the Keystone pipeline, areas that we can increase jobs, increase economic growth, and tap into America's energy supply more... That's one of those ones where I think that — the energy sector and our natural resources are an area where I think the president is very, very keen on making sure that we maximize our use of natural resources to America's benefit. It's good for economic growth, it's good for jobs, and it's good for American energy.

Protestors were thrilled back in early December, when the Department of the Army announced that it would not continue with construction as planned for the controversial pipeline. The $3.7 billion project, a section of which ran beneath a lake located near the Standing Rock Sioux reservation, became a rallying point for both environmental and indigenous activists, who turned out in droves to protest it.

But with Spicer's comments, the environmental and cultural victory seems likely to be short-lived.

The reversal is not surprising. Trump had previously said that he supported finishing the construction of the pipeline. Trump reportedly has owned stock in multiple companies that are building the pipeline. In a briefing back in December, his transition team said that President Trump's support of finishing construction "has nothing to do with his personal investments and everything to do with promoting policies that benefit all Americans." Yet it is unclear how much of that stock he has sold off. And during his campaign, he also received over $100,000 in political donations from an executive at the main energy company behind the pipeline.

Rick Perry, Trump's nominee for energy secretary, also sat on the board for two energy companies developing the Dakota Access pipeline, although Perry told ethics officials that he had resigned, and would be divesting from the stock he still owns in the companies within three months of his confirmation.

All in all, it's not looking good for those concerned about the environmental and cultural effects of the pipeline. But if the past is any indication, the activists and protestors won't give up anytime soon.