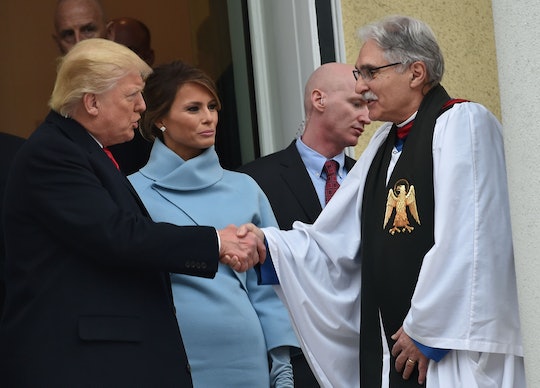 It's tradition for the incoming president and his family to attend a church service before the swearing in ceremony at St. John's Episcopal in Washington D.C. Although the president-elect did not permit reporters to join the service, a tad unusual in general (though not in the context of Trump's relationship to the media) they partook in the prayer service. Many are wondering, though, is Trump religious? Or was he just checking off his first inauguration day event?

Trump's team didn't let reporters into the church, but his team was tweeting throughout the service. By all accounts, Trump and soon-to-be vice president Mike Pence (accompanied by their families) enjoyed the prayer service, a long-held tradition for incoming presidents on their first day. While there aren't any rules about what religion a president is, the unofficial preference has been Protestant. John F. Kennedy, who was Catholic, was the only non-Protestant president and his religion was often a subject of controversy.

Donald Trump grew up in a Presbyterian family and regularly attended church growing up, meaning that he's joining the presidential majority of Protestants. But unlike some prior presidents, Trump's presidential campaign and platform haven't been that heavy on faith. In fact, he really didn't discuss his personal religious beliefs on the campaign at all, and he certainly hasn't drawn on them throughout the many controversies that have plagued him.

He does believe, though. At least that's what he told the Christian Broadcasting Network when they asked "Who is God to you?" "Well, I say God is the ultimate," Trump answered, "Nobody, no thing, no there's nothing like God."

After accusations of sexual assault started flying back before the election, and the revelation of the now-infamous Billy Bush tape, several pundits pointed out that Trump didn't apologize for his actions or ask for forgiveness — from God or anyone else, really. (Trump has denied all of the allegations. His representatives have not responded to Romper's requests for comment.) But others pointed out that it would have been out of character for him to suddenly espouse religious beliefs publicly — something he's never done, not just for the duration of his political campaign.

The Pew Research center has conducted polls about what the American people most respect, value, and desire in a president and religion usually comes out pretty high on the list. Even though there's a constitutional separation of church and state, in practice, religion has remained integral to many Americans' identities since the country was formed (an act largely motivated by those who wanted to break free of the Church of England).

In 2012, 67 percent of voters said they felt it was important for the president to have "strong religious beliefs." More Republicans (87 percent) than Democrats (66 percent) felt that way. 61 percent of adults surveyed said they would be less likely to support a presidential candidate who didn't believe in God.

That being said, many have also pointed out that Trump has not always exemplified Christian values. So, it's interesting that many of his supporters — who consider religion to be a very important part of their lives and think it should also be for the president — seem to overlook that.