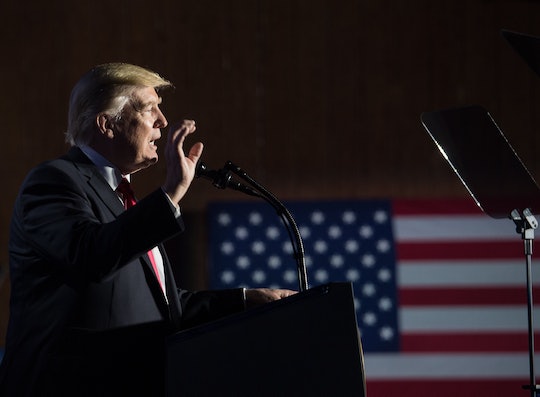 Trump's Confusing Back & Forth On Waterboarding

On Wednesday, President Donald Trump seemed to show support for waterboarding, the illegal torture method that was previously used in American holding prisons under President Bush's administration. During an interview with ABC News, Trump said, "Do I feel [waterboarding] works? Absolutely, I feel it works," and insisted the United States has to "fight fire with fire." But is Trump actually reviving waterboarding? The answer isn't as clear as many Americans and human rights groups would like, since the president's answers have been a bit confusing.

According to Politico, Trump told ABC that he had recently asked intelligence experts whether waterboarding and other methods of torture were effective tools. "And the answer was yes, absolutely," he said. When ABC's David Muir went on to ask if Trump wanted to reinstate waterboarding, the president didn't give a direct answer. Instead, he said:

According to Trump, however, he won't be making the decision on his own, telling ABC that he was relying on Defense Secretary James Mattis and CIA Director Mike Pompeo to make a decision on waterboarding. "I will rely on Pompeo and Mattis and my group," he said. "And if they don’t wanna do, that’s fine. If they do wanna do, then I will work toward that end. I wanna do everything I can within the bounds of what you’re allowed to do legally."

Based on Trump's answers, it's not exactly clear whether the Trump administration plans to bring waterboarding and other forms of torture back. Torture remains illegal in the United States, however — the Senate voted to ban its use from all government agencies in 2015. It also goes against several international laws, such as the International Covenant on Civil and Political Rights, the Torture Convention, the Geneva Convention, and the Universal Declaration of Human Rights.

Whether Trump's administration will argue that waterboarding does not constitute torture, though, remains to be seen. If they do decide to reinstate the torture technique, one thing is certain: Backlash from both foreign and domestic human rights groups is pretty much guaranteed.