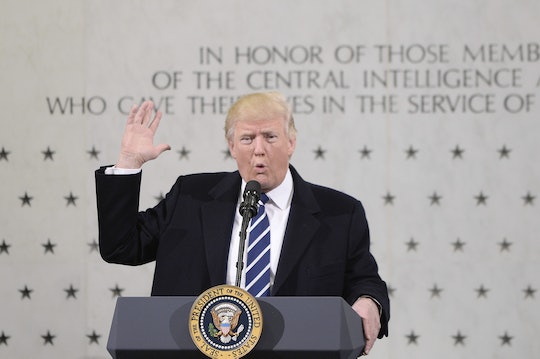 Never have I ever wanted something ridiculous that President Trump has said to be true more than when Trump mentioned that Monday would be his first official day in office. Maybe he would calm down, maybe he wouldn't get as much done, I naively hoped. Of course, though, Trump didn't mean everything he said, signing an executive order immediately on Friday that would attempt to undo much of Obama's legacy regarding the Affordable Care Act. Trump, whose stance on Obamacare has been as unpredictable as his moods, finally made it clear that he wanted to undo Obama's life-saving namesake legislation Friday when he signed an executive order that, according to ABC News, was "aimed at minimizing the economic burden of the 'Obamacare' law." Of course, on of the most important mandates of Obamacare had to do with contraceptive mandates, which explains why the president's first order in office has many worried. So will Trump get rid of the contraceptive mandates Obamacare cemented, or can they be saved?

On Friday, Jan. 20, 2017, Donald Trump was officially sworn in as the 45th president of the United States, and while crowd size, and protestors seem to be the only subject Trump wishes to discuss, on of his first acts as president is what has people most concerned. An executive order, a legally binding order issued by a president to the executive branch, is an easy way for a president to affect change in office. And Trump's first one? Lessen the grip that the Affordable Care Act (also referred to as the ACA or "Obamacare") has over agencies, and citizens.

The executive order that Trump signed on Friday, though, is more political than anything else. Because the main target of the executive order was something that was written into the law itself, Trump can't merely sign it away. Trump's order calls on the Department of Health and Human Services to do everything in their power to do away with parts of the law which place a heavy financial burden on anyone. Basically, the insurance mandate which required Americans to pay a fine if they do no insure themselves, is the first thing to go, according to Trump's executive order.

However, what this executive order doesn't do is give Trump the power to take away women's access to contraceptives on the spot. Although it does send warning signs to women everywhere that they may have their rights taken away, it's more of a showy gesture than anything else at this point, though it's no less troubling. (As a reminder: Technically, the Affordable Care Act only requires insurers to cover "preventative services for women," but what exactly that means is up for debate, according to a report by Stat News.)

The logistics and prerequisites that stand behind the Affordable Care Act are still under attack, because of Trump's executive order, whether or not they've been repealed yet or not. While it may not have called any swift action into play, it still sent a message: Trump and his administration are more than okay taking away women's access to contraceptives, and they're more than willing to fight for that.