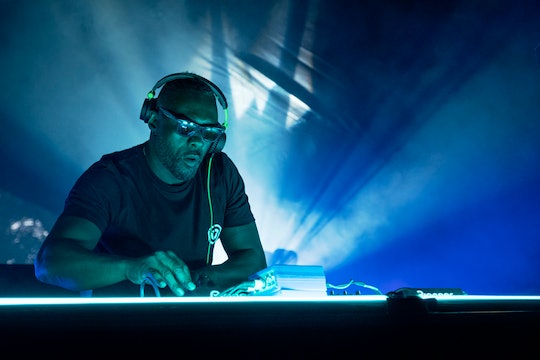 'Turn Up Charlie' Has Some *Sexy* Inspiration

I'm going to need someone to catch me as I fall because I learned so many mind-blowing facts about Idris Elba while doing research about his new Netflix comedy Turn Up Charlie (currently streaming on Netflix) that I may just pass out while typing. The show is about an aspiring DJ who gets roped into becoming a "manny" for his famous friends' trouble-making daughter, Gabby (Frankie Hervey). At first glance you may get The Nanny Diaries vibes, which means you're wondering if Turn Up Charlie is based on a book — and the answer is amazing.

Elba's new comedy is not based on a book, it's based on something so much better — his real life. Are you still breathing? Because I wasn't for a second when I discovered this wonderful fact. In all fairness, some of you may have known that Elba is a DJ. But even though I DVRed multiple specials covering Prince Harry and Megan Markle's wedding, I had no idea. I also have yet to watch his hit BBC show Luther or The Wire, so all I really knew about him was that I agree with his current "Sexiest Man Alive" title and his own steadfast belief that he should be allowed to hold on to it. There will be no arguing with me on that point, ever. It's his forever in my heart.

But even if People makes him pass on the title, Elba could still be the "Sexiest DJ Alive" forevermore. Because the job is not just a side gig for him. He has a moniker ("Big Driis") and he's played some of the most exclusive gigs any DJ could hope for — like Coachella with Childish Gambino and Ariana Grande. "“I’ve worked my whole life to play at Coachella. I made it at 46!” he told People about the gig. "I nearly passed out when I found out." Same Idris, same.

In my humble opinion, DJing Coachella is not nearly as impressive as DJing the royal wedding, though — and he did that, too. Ever respectful, Elba has kept quiet about the details of that day. He told The Guardian in August 2018, "I try not to talk too much about it, because it was a private day, but it remains one of the highlights of my life, for sure."

So, how does he know the Prince of Whales? "Harry’s a friend of mine," Elba said casually. "Just from round the way, haha! He’s a neighbourhood lad!" It must be nice living in a neighborhood full of palaces.

As for Turn Up Charlie, Elba, who costars on the show with JJ Field and Piper Perabo is also a co-creator and executive producer. He was also able to add a lot to the writing process, of course. He told People his contribution was "me telling stories about me and my kids running around town and Daddy being a DJ.”

Elba is dad to son Winston, 4 and a daughter named Isan, who is 17. He may be the Sexiest Man Alive, but he's also off the market (I was very sad to learn). He's engaged to American model and actress Sabrina Dhowre, and she's just as awesome as he is.

So, I'll just have to settle for watching his entire filmography and trying not to catch too many feels. If you're with me, Turn Up Charlie is a great place to start, as it's streaming on Netflix right now.