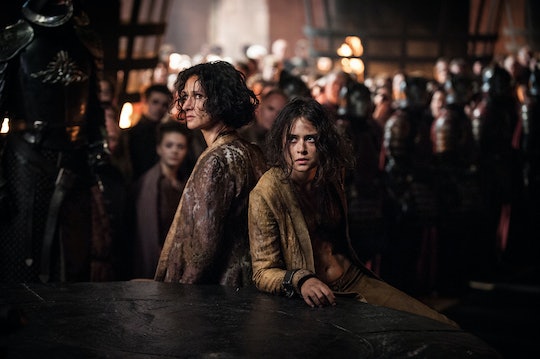 Tyene's Fate Was Sealed With A Kiss On 'Game Of Thrones'

Euron brought his "gift" to Cersei on the latest episode of Game of Thrones, and, naturally, she was more than thrilled about it. The gift turned out to be Ellaria Sand and her daughter, Tyene. Ellaria killed Cersei's daughter, Myrcella, at the end of Season 5, so it was only fitting that Cersei's revenge involved both mother and daughter. So is Tyene dead on Game of Thrones? Unfortunately, her death will come soon enough.

One has to wonder how long Cersei had been thinking about getting her revenge against Ellaria. She seemed very well prepared for it. The new queen had each of her prisoners chained up to opposite walls in a cell, facing each other, but just out of reach so that no matter how hard they strained, they could never touch each other. She also put gags in their mouths so they couldn't speak to each other, either.

The reasoning for this set up became clear, when Cersei kissed Tyene, the same way Ellaria did with Myrcella, coating Tyene's mouth with the same poison. Cersei than wiped her mouth clean, and took the antidote, as if it was no big deal. She then taunted Ellaria, telling her how she'd have to sit in that chamber and watch as her daughter succumbed to the poison and then stay there as Tyene's body began to rot. So is she dead? Not yet, but it's only a matter of time.

To make matters worse, Cersei guaranteed that Ellaria wouldn't be able to kill herself by starvation. Instead, Cersei said if Ellaria refused to eat, food would be forced down her throat so she would forever have to live next to the rotting corpse of her daughter.

Not only did Cersei get an eye for eye here, she also took Ellaria's murder by poison idea and made it 10 times worse. No parent should have to lose their child, but to have to watch them die right in front of you and not be able to do anything about it? That's an absolute nightmare. Then, being trapped with her daughter's corpse, Ellaria will certainly be driven mad and Cersei knows this.

In the Season 6 finale, Cersei made it clear she's the queen of revenge when she blew up the Great Sept and waterboarded Septa Unella with wine. However, what she did to Ellaria and Tyene made it clear just how ruthless Cersei can really be to her enemies. Did Ellaria deserve this? Maybe. But it's still a heartbreaking end to her, and her daughter's, stories.