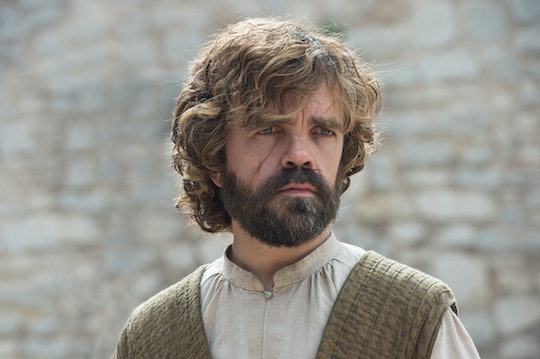 Is Tyrion Going To Die In ‘Game Of Thrones’ Season 6? His Fate Is In The Air

Game of Thrones is known for killing off "non-killable" characters — the characters that you think could never die because they're essential. We first saw it back in Season 1 when Ned Stark was beheaded, and then again with the "Red Wedding." And let's not even discuss the whole Jon Snow debacle. At this point, if you're a Game of Thrones fan you know that there's really no point in getting attached to a character because the writers don't care about your feelings and will consistently kill them off. And the new Game of Thrones trailer now has people worrying about the fate of a new essential character. Will Tyrion die in Game of Thrones Season 6?

In the past, if you read the books, you at least had a forewarning that one of your favorites weren't going to make it to...well whatever marks the end of the series. Either way, George R. R. Martin systematically destroyed your trust with his books, so you went into the show knowing to trust nothing. But, now that the show has surpassed the books, no one is safe. Anything could happen this season and since it tends to be the characters we actually like that die (R.I.P Khal Drago) who could possibly be next?

Although I hate to even think it, it could be Tyrion Lannister? Back in Season 4, Tyrion almost met his death when he was blamed for the death of his nephew, King Joffery. Of course, Tyrion didn't care that his nephew was dead (good riddances!), but he didn't do it. However, thanks to some help from his brother Jamie, Tyrion escaped and instead killed his back stabbing girlfriend, Shae, and his father, Tywin, on his way out.

But, with a new trailer for Season 6 of Game of Thrones now out, there's even more questions about what's to come. With Daenerys captured, it seems Tyrion is in charge of Meereen and Daenerys' dragons (minus Drogon who's flying free). Although Tyrion seems alive and well in the trailer, Daenerys left Meereen in the midst of a lot of political turmoil. The only reason Dany's still alive is because Drogon got her out of there before the Sons of the Harpy could kill her.

So if the Sons of the Harpy weren't happy with Daenerys, it stands to reason they won't like Tyrion much either. Based on the trailer, it seems Tyrion is already working on a plan; he wants to release the dragons. But Daenerys, the mother of dragons, was already having trouble controlling them, so it seems doubtful Tyrion will have anymore success. Still, if anyone could survive a city ripe with political turmoil and dragons it would be Tyrion Lannister.

Here's to hoping Tyrion survives at least one more season because really, what would Game of Thrones be without his unending sass? You can check out the new Game of Thrones trailer above.