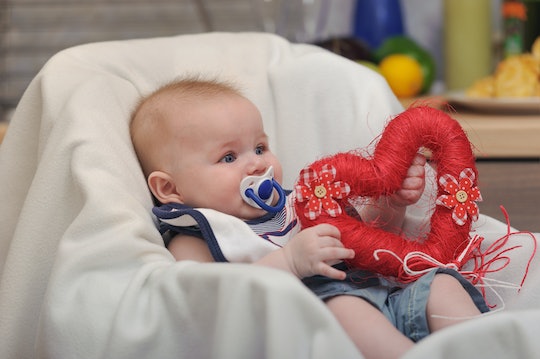 A Surprising Number Of Babies Are Born On Valentine's Day — Is This Why?

Most of us have probably wondered if Valentine's Day might be up there on the list of top holidays for conceiving a baby, what with all the wine, chocolate and romantic dinners going on around the country. But would it surprise you to learn that Valentine's Day actually is a very popular birthday? This may be why.

Valentine's Day is the most popular birth date between January 1 and July 1, according to The Daily Viz, and it could very well be because more people simply choose to have their baby on that day. The average number of births on Valentine's Day (taken over the course of two decades of birth data) is 11,636. Reporter and data journalist Matt Stiles created a heat map taking the average amounts of daily births in the United States between 1994 to 2014 and found that while Valentine's Day only ranks 63rd in the most common birth date list over the year, it is the most common birth date in the entire first half of the year.

In fact, this has been a trend since the '70s, at least. A chart published in The Daily Mail showed that using United States birth data from 1973 to 1999, Valentine's Day was the most popular birth date in all of the first five months of the year.

So, what's the popular baby-making holiday that's causing the spike? Well, The Daily Viz crunched some numbers to find out the likely conception date for these Valentine's Day babies: 266 days before birth "represents a hypothetical 'moment of conception' based on the normal gestation period for humans, 280 days, minus the average time for ovulation, two weeks." For Valentine's Day, that date would be May 24, which isn't a particularly memorable time of year. Perhaps graduation season turns you on? Maybe early Memorial Day festivities have people feeling extra frisky?

Joking aside, even a popular baby-making holiday couldn't account for the holiday being such a banner birth date, considering that the rest of the month ranks much lower on the list of common birthdays. It turns out, women may be intentionally scheduling their C-section for that specific date, or possibly even "choosing" to either hold that baby in a few days longer or pop it out a little early, in order to get a Valentine's Day birthday for their little one. Wild idea? Well, bear with me.

A study in Social Science & Medicine called "The Influence of Valentine's Day and Halloween on Birth Timing," concluded that the positive symbolism of the love-filled holiday could account for the sharp increase in the number of births on that day compared to the days on either side. "On Valentine’s Day, which conveys positive symbolism, there was a 3.6 % increase in spontaneous births and a 12.1 % increase in cesarean births," the report explains. That is some jump in the c-section rate, but it's also a noticeable peak in spontaneous births as well.

The study, conducted by Becca R. Levy, Pil H. Chung, and Martin D. Slade, took into account the number of births on both Valentine's Day and Halloween, as well as on the days before and after those holidays over the course of 11 years. The authors came to the conclusion that not only are scheduled births influenced by how our culture views Valentine's Day and Halloween, but "that pregnant women may be able to control the timing of spontaneous births, in contrast to the traditional assumption."

If you've ever questioned a woman's ability to accomplish something she puts her mind to, now would be the time to reconsider that theory. Levy, Chung and Slade wrote, "It is known that cultural representations, in the form of stereotypes, can influence functional health." Yikes. So, if you have a particular feeling about St. Patrick's Day and really want a little Irish cherub baby, maybe, just maybe, you might be able to make it happen.